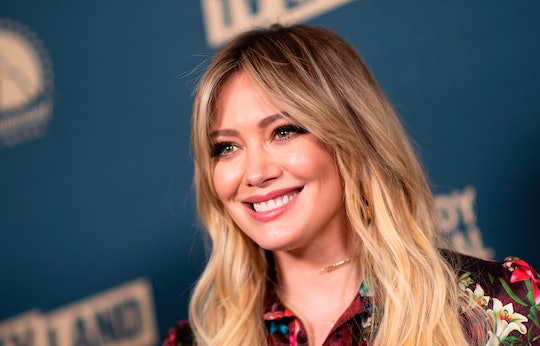 Over the holidays, Hilary Duff married her longtime boyfriend Matthew Koma and, of course, her adorable children were part of the beautiful ceremony. Now, if you've gotten married with your kids on hand, you know what this means — be prepared to embrace a little chaos. And that's exactly what Duff's sweet wedding photo with her daughter Banks, nestled in her arms, is all about.

The Younger actress and Koma tied the knot at their home in Los Angeles on Saturday, Dec. 21, with family and friends there to witness their ceremony, according to E! News. That, of course, included Duff's 7-year-old son Luca, who she shares with ex-husband Matt Comrie, and the newlyweds' 1-year-old daughter Banks. The actress looked gorgeous and happy in a Jenny Packham dress (the same British designer who created Kate Middleton's wedding look in 2011) surrounded by the people she loved.

But that doesn't mean the day went off without a hitch — how could it when you through a 1-year-old in the mix? As the Lizzie McGuire star admitted in a wedding photo she shared on Instagram that features herself carrying Banks down the aisle, her daughter "cried up until we opened the front door."

"Little girl cried up until we opened the front door and she knew we were walking towards her daddy and bruvvah," Duff captioned the photo.

Despite the few tears, it was a lovely moment. Duff walking down the aisle towards her new husband with their daughter in her arms. Towards Luca too, who acted as ring bearer. To be fair to Banks, she was likely reacting to all of the emotion that was presumably floating around at the wedding. It looks like things eventually turned out fine once the entire family was reunited, however.

Weddings can be tough for little ones, especially when they don't exactly know what's going on. They're dressed up, everyone is maybe a little tense and staring at them. The Knot has some pretty great tips for ways to include your kids in your wedding, like giving them a little present the morning of the wedding or letting them create a fun kid cocktail. But I think what Hilary Duff did is perhaps the best. Just let her daughter cry it out. Let the day happen the way it was going to happen and she got a lovely photo at the end of the day.