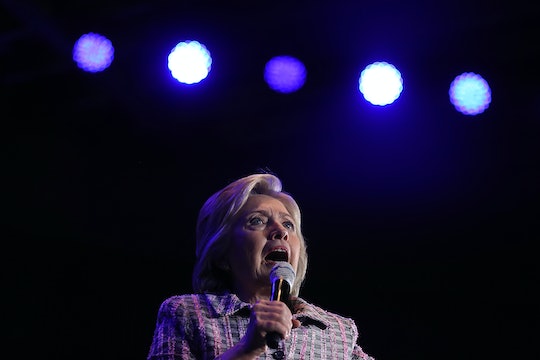 Let's take a minute here, ladies. Let's take a little break from the news of the day to actually talk about the News of the Day. Let's forget, for a brief moment, about Donald Trump and the RNC. Let's forget about all of the scandal associated with the DNC, forget about the protests and the rallies and the divisions. Let's take a moment to acknowledge that Hillary Clinton has become the official Democratic Presidential nominee. And let's actually feel what that means somewhere quiet inside ourselves.

For the first time in the country's 240-year history, a woman has an excellent chance of becoming the next President of the United States. She will shatter one of the last, strongest glass ceilings in the western world. And whether you are #WithHer, or you #FeelTheBern, it feels like a significant moment to reflect on how far we have truly come. If you need a reminder of what our journey as women has looked like over the last decade, check out this 102-year old woman from Arizona casting her electoral vote for Clinton.

Hillary Clinton, former Secretary of State, one-time FLOTUS, and champion of women's rights has finally made it. As President Obama so eloquently said when he endorsed former Secretary of State Hillary Clinton, "I don't think there's ever been someone so qualified to hold this office." This historic moment was not lost on the crowd at the DNC as the official roll call was held either. As Maryland Sen. Barbara Mikulski said, "On behalf of all the women who've broken down barriers for others, and with an eye toward the barriers still ahead, I proudly place Hillary Clinton's name in nomination to be the next President of the United States of America."

Clinton has, of course, been here before. In 2008 she lost the Democratic Party nomination to then-Sen. Barrack Obama. Since her loss in 2008, Clinton has grown not only as a politician but as a woman. She continues to be unapologetically fierce in a political environment that often tends to chide women for being too "ballsy," and she continues to play to her strengths.

Rather than allowing herself to get dragged into the expert level mud-slinging (particularly from the Republicans), Clinton ran a campaign largely devoted to policy. She continues to fight for gender equality, equal pay for equal work, and affordable child care. As the former Secretary of State, she is uniquely qualified to handle foreign policy issues. And, perhaps most importantly, she has the inimitable gift of hindsight. She has made mistakes and continues to learn from them.

Clinton has had to deal with sexism throughout her campaign, not only in the media but with her fellow politicians. Her opponent Donald Trump once accused her of playing the "woman card" when she vowed to ensure that half of her cabinet would be women if elected, saying:

I call her 'Crooked Hillary' because she’s crooked, and you know the only thing she’s got is the woman card. That’s all she’s got, and it is pandering. It’s a weak card in her hands. In another person’s hands it could be a powerful card. I’d love to see a woman president, but she’s the wrong person.

Here's hoping that woman card trumps Trump every day of the week. Today was a good day for women, ladies. Take a moment and breathe it in.