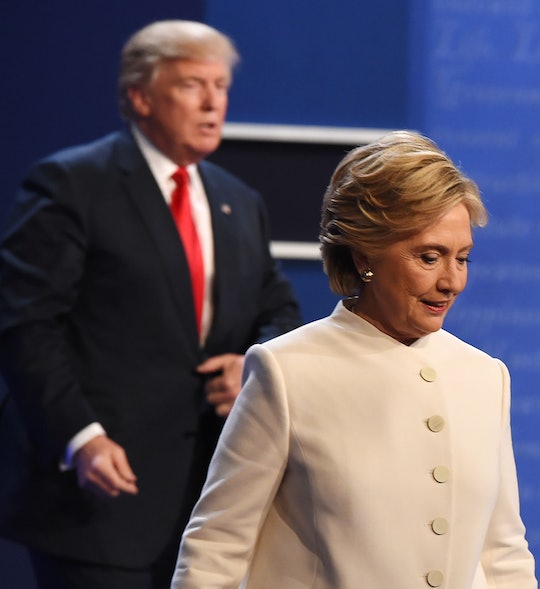 Former presidential nominee Hillary Clinton has a long history of holding her tongue. A history of trying to keep it together, keep up appearances, keep moving forward despite mountains of criticism, especially in her political career. Composure and privacy were important to her... until now. It seems the gloves are coming off; Clinton is spilling the beans in a new book, and I am completely here for all of it. Especially since Clinton reportedly calls Trump a "creep" in her book.

It turns out Clinton did not spend all of her time taking contemplative walks in the woods since the ruinous 2016 presidential election when she lost to President Donald Trump. She was also writing a book for Simon & Schuster. Her new book, What Happened, is focused on Clinton's personal experience during the election rather than a blow-by-blow of the election because, as was heard in an excerpt from the audio book with MSNBC's Morning Joe on Wednesday:

I don't have all the answers and this isn't a comprehensive account of the 2016 race; that's not for me to write. I have too little distance and too great a stake in it. Instead, this is my story.

And what a story it is. I hope the notoriously sensitive Trump has his itchy Twitter finger at the ready... he's going to need it.

Clinton shared an excerpt from her book, which will be available in stores Sept. 12, about President Trump's behavior during the second debate between the two on Oct. 9. An audiotape of Trump bragging to Access Hollywood's Billy Bush about "grabbing women by the pussy" had just been leaked, and it appeared to make Trump especially aggressive with Clinton. She wrote of the experience, according to E! News:

It was the second presidential debate and Donald Trump was looming behind me. Two days before, the world heard him brag about groping women. Now, we were on a small stage, and no matter where I walked, he followed me closely, staring at me, making faces. It was incredibly uncomfortable. He was literally breathing down my neck. My skin crawled. It was one of those moments where you wish you could hit pause and ask everyone watching, 'Well, what would you do?'" she said. "Do you stay calm, keep smiling and carry on as if he weren't repeatedly invading your space? Or do you turn, looking him in the eye and say loudly and clearly, 'Back up, you creep. Get away from me! I know you love to intimidate women, but you can't intimidate me, so back up. I chose option A. I kept my cool, aided by a lifetime of dealing with difficult men trying to throw me off,” Clinton writes. “I did, however, grip the microphone extra hard. I wonder though whether I should have chosen option B. It certainly would have been better TV. Maybe I have over-learned the lesson of staying calm, biting my tongue, digging my fingernails into a clinched fist, smiling all the while, determined to present a composed face to the world.

Hands up if you wish she'd gone with Option B.

Clinton's reflections on Trump, especially considering what a private woman she has been in the past, would be totally worth the price of the book. But the real story will be about her own personal journey; the highs (like being the first woman nominated for president in American history) and the lows (she lost, we have President Trump... we know the lows). She reflected on her journey, the happiness and the heartbreak, and came away with some hard truths, according to Morning Joe.

I want to pull back the curtain on an experience that was exhilarating, joyful, humbling, infuriating and just plain baffling. Writing this wasn't easy. Every day that I was a candidate for President, I knew that millions of people were counting on me, and I couldn't bear the idea of letting them down, but I did. I couldn't get the job done. And I'll have to live with that for the rest of my life.