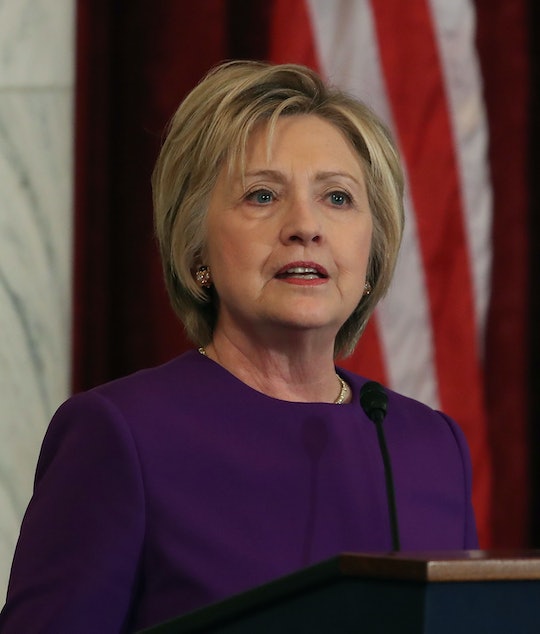 As difficult as it was for many to watch the inauguration of President Donald Trump Friday, it had to have been most difficult for former Secretary of State Hillary Clinton. After a hard-fought campaign, she lost to Trump despite winning the popular vote by an unprecedented margin. On Friday, in what was her first major televised appearance since she gave her concession speech, Clinton — as an invited guest of her husband, former President Bill Clinton — had to watch as Trump was sworn in as the country's 45th president. No one was sure whether she would comment on the inauguration in an official capacity (I still can't imagine she ever really thought Trump was going to win), but Hillary Clinton's response to Trump's inauguration was, at least, at the forefront of everyone's minds.

Since Clinton's election loss on Nov. 8 — an outcome which shocked many — and her delayed and emotional concession speech, during which, as The Washington Post noted, she emphasized a message of gratitude to the women who supported her, and one of hope for the little girls who watched her, Clinton has made only a handful of public appearances. (So few were her appearances, in fact, that it started to seem as though you'd have a better chance at a Clinton sighting by hiking in the woods in Chappaqua, New York than you would at a formal public event.)

Clinton resumed some of her political duties in December, according to The Guardian, and during her speech at the unveiling ceremony for a portrait of retiring Senate minority leader, Harry Reid, Clinton proved she still had her sense of humor, telling the crowd, "This is not exactly the speech at the Capitol I hoped to be giving after the election."

Clinton and her husband appeared at the inauguration on Friday, and were introduced along with other former presidential couples while Obama and Trump made their way to the ceremony together in a limo, as part of the presidential motorcade. Clinton, who wore a white pantsuit and coat — an official color of the suffragette movement — received gracious applause and cheering from the crowd, and remained incredibly poised and composed as she greeted those on those inaugural platform.

In a tweet ahead of Trump's arrival at the ceremony, Clinton's camp shared her thoughts on why she chose to attend the inauguration, noting that it was her way of honoring democracy:

In all honesty, if I were Clinton, I'd probably have preferred skipping the entire event altogether. But given Clinton's concession speech vow to offer Trump "an open mind, and a chance to lead," according to The Washington Post, she didn't really have much of an option not to attend, since backing out would have surely been seen as a sign of sour grapes at best, or, more likely, as downright unpatriotic. And, according to Politico, Clinton certainly hasn't been the only political figure who has had to attend the inauguration of a rival: in 1961, outgoing Vice President Richard Nixon sat and watched while President John F. Kennedy was sworn in as the 35th POTUS, and in 2001, outgoing Vice President Al Gore also watched while President George W. Bush was sworn in for the first time.

There's also the fact that, according to The Independent, in 250 years of presidential inaugurations, only five former presidents and their wives opted out of attending their successors' inaugurations — and while Trump isn't succeeding either of the Clintons, the fact remains that her absence would be a pretty big deal.

For those who supported Clinton, and hoped she would ultimately be the one standing there reciting the presidential oath of office today, it was surely difficult to watch as she was relegated to a mere observer on the arm of her husband. But for Clinton herself, it must have been infinitely harder and more gut-wrenching. Yet, one thing Clinton repeatedly proved again and again during her campaign is that she was absolutely able to keep her cool in moments where it would have been really, really easy to react unfavorably. And, unsurprisingly, that is exactly what she did during Trump's inauguration.