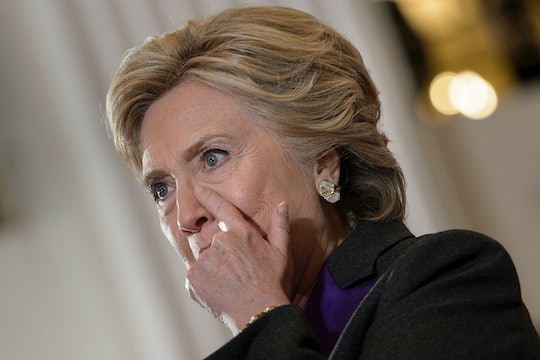 Right now, I don't care if you are a Democrat or a Republican. I don't care if you were one of those people who chanted "Lock Her Up!" or you "Felt The Bern" or you were "With Her". None of that matters right this moment. Because it is Thanksgiving, and right in this moment, I am thankful. For my slippers, for cold whipped cream and hot coffee. And I am especially thankful to neighbors of Hillary Clinton and their surprise Thanksgiving decorations.

Former Secretary of State and almost-first ever female President of the United States Hillary Clinton was everywhere we looked for awhile. And now sightings of her are very much like those old "Where's Waldo?" books that made me completely insane. She pops up in the selfies of gloriously excited shoppers and hikers, but she has kept her public appearances to a minimum ever since her devastating loss to now President-elect Donald Trump. I think about her quite a lot. I wonder how she's holding up. I wonder if she's girding her loins for a comeback, or planning on a new career as a "former". But most of all, I've wondered if she knew how many people were well and truly thankful for her. She need wonder no more.

Supporters of Clinton decided to anonymously line her street in Chappaqua, New York with posters of positivity, messages like "Thank you, Hillary", "We are thankful for Hillary Clinton, an American Hero", and "I'm With Her".

I don't know what has me crying more; the mental picture I have of these kindly neighbors and well-wishers, making homemade posters (because who even does that anymore?) in secret. Simply hoping they might brighten someone's day on account of being almost president recently.

Or is it the image I have of Clinton herself, driving home from the grocery store (whereupon she was again ambushed for an enthusiastic selfie) and turning the corner to see her street lined with good will. Maybe she was doing some deep breathing exercises, trying to maintain her good health after months (no, years) of stress. Maybe she had forgotten, for just a moment, all of the wonderful things she has done for people over the years. Maybe, just for a moment, she was believing they negative hype. And then she saw the posters. Gulp.

I don't know what Clinton was doing when she saw the posters, and I'm sure cynics will have some trumped up (get it?) conspiracy theory that she planted the posters herself and blah, blah, blah.

But for today, I'm deciding to be thankful. For kindness, for selflessness. For a woman who was almost president. And for the people who gave her a much-needed boost.