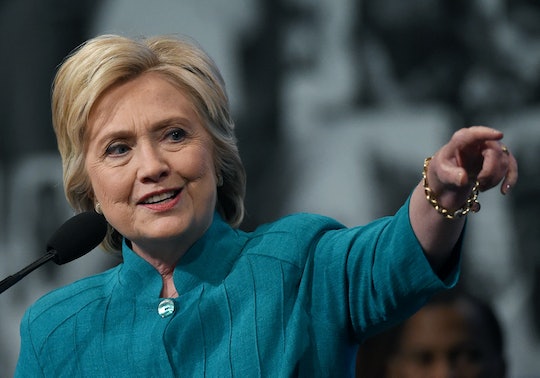 So here is something I never knew about Hillary Clinton: she's decently funny. As some of us are sitting up late, watching the Republican National Convention finally wind to an awkward close, Hillary Clinton is reacting to Trump's RNC speech. And the Democratic Presidential candidate is slaying.

As Republican Presidential candidate Donald Trump gave what felt like basically the longest speech that has ever existed (while still not mentioning women's rights, in case no one noticed), Hillary Clinton was reacting to his words on Twitter. Which makes absolute sense, considering how frequently she was the topic of his speech. Trump wasted no time eviscerating Clinton to thunderous applause and jubilant chants of "Lock her up!". In short order, Trump accused Clinton, among other things, of manipulating the media, leaving behind a legacy of "death, destruction, and weakness" and essentially creating ISIS.

Her bad instincts and her bad judgment – something pointed out by Bernie Sanders – are what caused the disasters unfolding today. Let’s review the record. In 2009, pre-Hillary, ISIS was not even on the map.

Clinton will, of course, have the chance to rebut many of these claims during the Democratic National Convention in Philadelphia next week, but for now she's letting her Twitter do the talking.

When Trump decided to create a new tagline to accompany the oft-repeated "Make America Great Again", Clinton made her feelings on the subject clear.

And how does Clinton feel about Trump's policies?

I think, perhaps, the look on Clinton's face here pretty much sums up her feelings on Trump's speech.

Let's all take a breath, pat each other on the back, and acknowledge that we survived Trump's RNC 2016 speech.

T-shirts will be made available, I suspect. And I also suspect Clinton might buy one if they are.