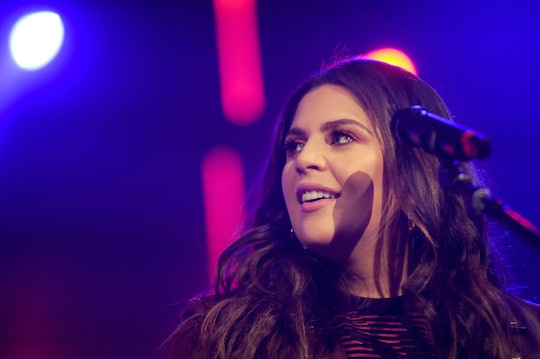 "If you see me dart off the stage, just kill some time." That's what Hillary Scott, the 32-year-old lead singer of Lady Antebellum and a mom of three, used to tell her bandmates every night before performing. Pregnant with monochorionic diamniotic twins — twins that share a placenta but are in their own amniotic sac —made touring different, to say the least. But for Scott different didn't automatically mean "bad." It also didn't mean impossible, or that she would have to stay out of the country music game. After all, there are pregnant women around the world that go to work, day in and day out, and Scott is ready for us all to focus not on what they can't do, but what they can do.

"Women are a force of nature and it's time we focus on how pregnant women can do so much more than a lot of people realize," Scott tells Romper. "So it's about having the confidence to say, 'I'm going to show up. I'm going to do my job and not just to the best that I can, but I'm going to show up.' You have the ability to perform at your best, whether you're pregnant or not."

Scott found out she was pregnant with twins on tour, and then continued touring through the entirety of her first trimester, so the idea that women become incapable the moment they hold a positive pregnancy test in their hands doesn't sit well with her. "You're literally watching your body change and grow and provide for a life growing inside of you," she says.

Instead of feeling limited by a pregnancy, Scott encourages women to “truly focus on the beauty and the power.”

The number of pregnant women working full-time in the United states has been increasing, jumping from 40 percent in the early 1960s to 56 percent in the late 2000s, according to a 2015 report from the Pew Research Center. And, according to a recent survey conducted by Herbal Essences, many of those women are treated less than; negatively impacting their confidence in their bodies while pregnant. A reported 62 percent of pregnant women were advised not to exercise at all, despite a variety of reports that have found exercise to be safe — and even healthy! — when pregnant, and, on average, pregnant women reported receiving unsolicited advice about parenting from an average of 15 people.

In a new anthem video announcing Herbal Essences’ Pregnant Women Can campaign, a pregnant woman says, "People think I'm fragile because I'm pregnant," but pregnant women will work over 2 billion hours this year, and volunteer over 70 million hours. They will run over 100 million miles, and over 200,00 businesses. And, for Scott, highlighting how capable pregnant women are is essential. "I am so passionate about this journey through pregnancy into motherhood than I've, honestly, ever been in my entire life, and I wanted to take every opportunity to wave the flag of empowering pregnant women and new moms," she says.

That doesn't mean working while pregnant is easy, though, and Scott faced her fair share of challenges. While on tour she was sleeping 18 hours a day, and dealing with some pretty hefty "pre-show sickness," as she called it, so the fatigue was a lot to overcome. "I love my work," Scott says. "It's part of what I was put on this earth to do. So I wanted to be able to do my job as best as I possibly could, but I also knew that I had to pace myself." And that, according to Scott, is when communicating with everyone around her came in handy. She wanted people to know when she was having a great day, when she was having a rough day, and stay as transparent about the entire process as possible.

That willingness to be vulnerable and transparent is, for Scott, also a sign of strength and capability; one she embodied when she shared, very publicly, that she suffered a miscarriage prior to her twin pregnancy. Through her work a past pregnancy loss and the joy of carrying two forming lives inside of her collided on stage, and in a way that truly highlights how capable pregnant women are.

"I walked [the journey of miscarriage] really publicly and wrote a song about it that we released on a family, faith-based project that I did a couple years ago," she says. "And we actually performed that song in our show every night, at this kind of acoustic moment with my bandmates." At the time no one knew Scott was pregnant, so even on stage with her band and in front of thousands of people, she worked through a moment that brought death and life together alone. "At that point in the show, every night, there was a whole other level of emotion attached; a whole other depth of feeling," Scott explains. "So I just tried to kind of live in and savor that moment."

An estimated 17 percent of all pregnancies end in miscarriage, according to TIME, so pregnancy after loss is common for many moms-to-be. That's why Scott wanted to be transparent about not only her miscarriage journey, but her pregnancy-after-miscarriage experience; one that takes an undeniably large amount of mental and emotional strength. "It's about not letting the guilt or shame attached to your grief of knowing that that's something you walked through take over and, instead, letting yourself feel the joy of seeing that positive pregnancy test again." For Scott, pregnancy after miscarriage was a test of faith, and an exercise in letting go. "There's a point where I just had to let go and know that all I could do is take care of myself and pray that the babies were safe."

Whether it's taking care of an older child, running a business, getting through a pregnancy after suffering a miscarriage, or stepping on stage in front of a seemingly endless crowd — pregnant women get the job done. They go to work, care for their children, run their households, make music, perform in their chosen fields, and all while growing tiny humans. So while it may be easy to focus on all the things pregnant women can't do — like eat deli meat or sushi — it's much more realistic to focus on what they can do. "I think those messages can be really limiting," Scott says. "I think it's really beautiful to shed light on how freeing pregnancy can be." After all, for Scott pregnancy meant stepping on stage to sing a song that documented her miscarriage, while she secretly carried twins inside her body, and experiencing the freedom to enjoy a moment made by her, just for her.