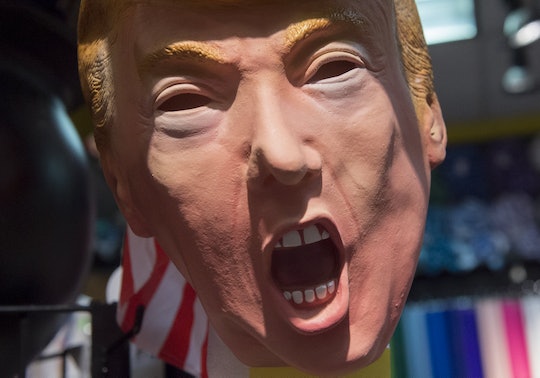 Here are the facts: Most of the country has seen video of Republican presidential nominee Donald Trump bragging about reportedly kissing and groping women without their consent. In response to hearing him say, during the debate last week, that he's never done those things, a slew of women have emerged to say that yes, actually, he allegedly has — to them. Still, many conservatives, most forcefully Trump himself, have attacked these accusers, insisting that their stories are made up, that they're out for political gain or their "15 minutes of fame," that real survivors of sexual assault would have reported their trauma straight away. And the awful, barely human dredges of the internet have embraced the victim-blaming crusade too, really outdoing themselves with the viral #HillaryGropedMe hashtag that's literally a sickening case study in why those who have experienced sexual abuse often don't immediately speak up.

Since the notorious 2005 "Trump tape" rattled his campaign in early October, just about a month before Election Day, more than 10 women have opened up to various media outlets about their alleged nonconsensual encounters with Trump — experiences that span more than 30 years and involve the GOP nominee reportedly engaged in the quite unpresidential (and illegal) acts of allegedly attempting to put his hands up their skirts and kissing them on their mouths without warning.

You know, exactly the type of behavior he gloated about with then-Access Hollywood host Billy Bush in that infamous video.

Trump himself has repeatedly denied these claims, in one case slinging a disparaging "Look at her" at one of his accusers, a former People reporter who wrote a first-person account of how the mogul allegedly cornered her in a room and jammed his tongue into her mouth at his Mar-a-Lago estate in 2005. It was an insinuation that she was not pretty enough for him to victimize. Romper reached out to the Trump campaign for comment but did not immediately hear back.

"If somebody actually did that, Chris, any reasonable woman would have come forward and said something at the time," Trump surrogate AJ Delgado told MSNBC's Chris Hayes on-air, this time working to discredit a New York Times report that Trump had allegedly forced himself on a receptionist who worked in Trump Tower in 2005 and a woman seated next to him in a plane in the early 1980s.

And that disgusting perpetuation of rape culture, along with Trump's supporters' refusal to recognize that fallibility of their candidate, spawned the odious #HillaryGropedMe hashtag. Using it, trolls are levying outrageous, mocking claims that Democratic nominee Hillary Clinton assaulted them in ways similar to how Trump's many accusers say he did to them. I'm loath to afford these scraps any additional exposure, so here's a very, very small sampling:

The whole aim of this stunt, of course, is to portray the alleged victims' reticence to publicly subject themselves to the relentless attacks that are inevitable in accusing a powerful man on sexual assault. But the condescending, ruthless, vicious, callous tweets themselves show exactly why these alleged victims did not go public about their alleged ordeals sooner.

According to a CNN roundup of tweets published under the auspices of the #WhyWomenDontReport hashtag, the main fears that hold them back from doing so have largely manifested: They're often worried about the backlash; they're concerned that no one will believe them; a lack of physical evidence or eyewitnesses makes them weary; they're intimidated by the very real threat of being blamed for the crime committed against them; they don't want to assume the label of "victim," their attacker why was powerful person.

A hashtag like #HillaryGropedMe, which trivializes sexual assault and excuses those accused of it from facing any real accountability, perhaps encompasses all of these reasons. It also lends undeserved credence to myths about "appropriate" reactions to being the victims of a sexual assault — like the belief that, even in a world in which only six out of 344 reported rapes result in incarceration for the perpetrator — a woman's first and overwhelming instinct should be to report, report, report.

In an interview with Vox's Sarah Kliff, a former cop who worked on sexual assault cases for decades explained that he's not at all surprised that many of the allegations against Trump are just surfacing now. "This is not uncommon at all," Tom Tremblay said. He continued:

The more power and control someone has, the more devastating it is for a single victim to feel like they could come forward and report this. It’s like, who the hell is going to believe me when it’s this big, powerful person?

So when one victim comes forward, it’s not at all uncommon to see others think, “Well, they came forward; now it’s not just my word,” and then the next person says the same thing. We often see that offenders are serial offenders. They are entitled for a long period of time. So it’s not uncommon to see someone say, I’m going to come forward because this person did.

Hearteningly, there's vociferous pushback to the #HillaryGropedMe trend, too:

Donald Trump epitomizes the sense of entitlement some men feel over women's bodies, and those using the trend to mock sexual assault victims are totally enmeshed in perpetuating rape culture when they employ hashtags like #HillaryGropedMe. It's a despicable, deplorable message to transmit to the world, and it has to stop.