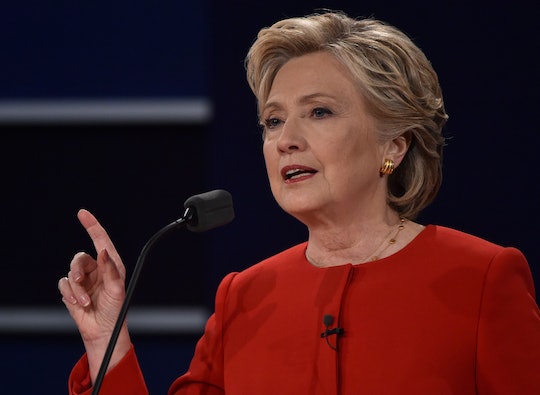 Even before the first presidential debate of 2016 got underway, the internet was trying to conjure up the main talking points for the candidates. While Donald Trump seemed to be making a statement by breezily refusing to prepare, Hillary Clinton seems to have gone the more traditional route — probably because she knows Trump, and the media, will scrutinize each and every word she says on the debate stage. Hillary's opening statement proves she's thinking about the future, though, and proved preparing for a presidential debate, in the end (and in the beginning) pays off.

She gave a shout-out to her granddaughter, who turns two today, saying that because of her she's been thinking about the future a lot. She then turned her attention to the audience and those watching at home:

I want us to invest in you. I want us to invest in your future. That means jobs in infrastructure and advanced manufacturing. In innovation and technology. Clean, renewable energy and small business — because most of the new jobs will come from small business. We also have to make the economy fairer. That starts with raising the national minimum wage and also guarantee — finally — equal pay for women's work.

I also want to see more companies do profit sharing. If you help create the profits, you should be able to share in them — not just the executives at the top. And I want us to do more to support people who are struggling to balance family and work. I've heard from so many of you about the difficult choices you face and the stresses that you're under. So let's have paid family leave, earned sick days. Let's be sure we have affordable childcare and debt-free college. How are we gonna do it? We're going to do it by having the wealthy pay their fair share and close the corporate loopholes.

This isn't exactly Clinton's first rodeo; she's been in over 40 debates in her lifetime and knows the ropes better than most — certainly better than Trump, who hasn't exactly been a team player in the debate circuit this year. (Recall that when Megyn Kelly moderated one of the Republican debates earlier this year, Trump refused to attend.)

She did say, at a campaign event earlier this month, that she has "a tendency to over prepare" and can be the type of person to "sweat the details," according to CNN.

So it was really no surprise that Clinton offered a calm, collected and cohesive statement. While the first debate of election season will only feature a few of the hot-button topics to be discussed between the candidates before November's general election, Clinton managed to hit on her own campaign's personal high notes expertly and then, asked something very important of the audience:

We're going to have a debate where we are talking about the important issues facing our country. You have judged us. Who can shoulder the immense, awesome responsibilities of the presidency? Who can put into action the plans that will make your life better?

However, perhaps the most important moment of her opening statement came when she spoke about her granddaughter and how often she thinks about the future.

The central question in this election is really what kind of country we want to be and what kind of future we’ll build together. Today is my granddaughter’s second birthday so I think about this a lot. First we have to build an economy that works for everyone not just those at the top.

While it's been suggested (sometimes subtly, sometimes not-so-subtly) that being a woman and a mother and a grandmother makes Clinton unfit for office, there's no denying that she cares about the future and the generations that deserve to have one.