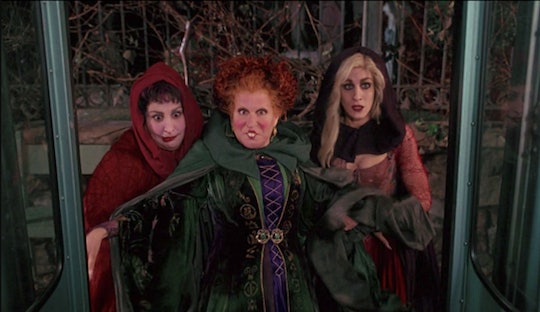 I'm not always a fan of sequels, this I will tell you right now. Sometimes it feels incredibly forced or like a marketing gimmick or whatever. This, my friends, is not one of those times. I'm here to tell you that, after years of patiently waiting, Hocus Pocus 2 is officially coming to Disney+ and please get a virgin to light that black candle because the original cast needs to come back.

Fans of the original 1993 Hocus Pocus film starring Bette Midler, Sarah Jessica Parker, and Kathy Najimy are about to lose their ever-loving minds. So many of us despaired that we would never see the Sanderson sisters ride again, terrorizing young children in an effort to restore their youthful glow in a way I can only describe as just delightful. The movie has developed a cult-like status over the past 26 years, with groups of friends dressing as the three witches at pretty much every Halloween party in the country.

Every year, millions of people watch the original movie directed by Kenny Ortega (who also gave us the High School Musical movies, bless him) at Halloween, wanting to reclaim the magical chemistry of the beloved Hocus Pocus. And now it seems we're definitely getting a sequel. What's more, it's going to be written by a woman, according to Deadline. Winnifred Sanderson would be overjoyed, I'm sure.

TV writer Jen D'Angelo, who is perhaps best known as a writer on the show Workaholics, has been slated to write the sequel, according to Collider. One can only hope that she is a super fan of the original movie, since it wasn't exactly a big box office smash in the first place. Hocus Pocus only made $38 million worldwide when it was initially released, according to Variety, not becoming a huge success until it was released on video.

Now, though, the movie has reached cult classic status level; just last year Freeform hosted a two-hour 25th anniversary reunion special with the original Hocus Pocus cast. Speaking of whom, Disney+ hopes to bring back Midler, Najimy, and Parker as the Sanderson sisters, although none of them have officially signed on to the project, according to Entertainment Weekly. I can't even begin to imagine Hocus Pocus without them, so here's hoping D'Angelo writes a script that draws them back in.

It will be interesting to see if the second Hocus Pocus movie can recapture the particular magic of the first. The movie was based on a story by Mick Garris and David Kirschner, who wrote it together after Kirschner's wife heard him telling the first version as a bedtime story for their daughter, according to Entertainment Weekly. Just think about the hours of pure joy fans have gotten from that story. And now think about the hours of joy still to come once Disney+ adds the sequel to its streaming service.

Hocus Pocus 2 is still in the very early stages of development so it definitely won't be around for fans to enjoy this Halloween. Which means we will all just have to remain content to re-watch the original this year. So let's all gather our sisters and do exactly that.