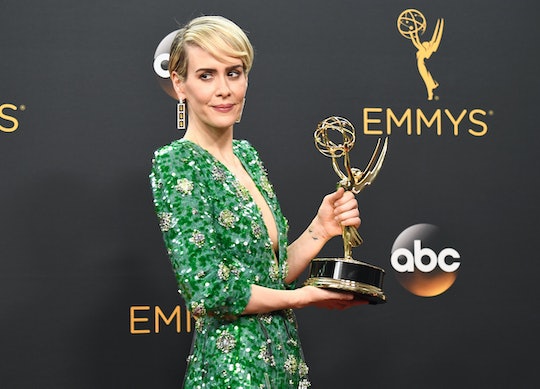 The 2016 Emmys weren't all that eventful but the love was real among the winners. FX's Sarah Paulson, who was up for Emmys for People vs. O.J. Simpson and American Horror Story, gave her girlfriend Holland Taylor shoutouts the entire night. Luckily, Holland Taylor's tweets about Sarah Paulson at the Emmys proved that she was watching her partner sweep up.

Paulson won for lead actress in a limited series or movie for her role in The People vs. O.J. Simpson: American Crime Story and she was all about thanking her cast and crew. Paulson called her girlfriend on the runway saying, "Hi Holland — Holland Taylor, if you’re watching, I love you," according to E! News.

Paulson was all business during her acceptance speech. She said, "The more I learned about the real Marcia Clark, not the two-dimensional cardboard cut-out I saw on the news, but the complicated, whip smart, mother of two...the more I had to recognize that I, along with the rest of the world had been superficial and careless in my judgment and I'm glad to be able to stand here today in front of everyone and tell you: I'm sorry."

Taylor was watching the whole time and had the best response to her girlfriend's win. She tweeted early on, “If I’m watching…?? If I’m WATCHING??? YES, I’m watching–!!! good LORD! … I LOVE you!!!”

Some at home may have wondered why Holland didn't accompany Paulson to her big night. That's because Paulson took the real Marcia Clark as her date to the Emmys this year. So her girlfriend had no choice but to tweet her love from afar.

But she wasn't angry about it. Instead, she tweeted her support all night long from the red carpet to Paulson's win:

Once Paulson won, Holland simply wrote, "there it is."

That's real love. She was even able to joke about not getting to walk the red carpet.

The relationship between the two has been a huge story in the media, mainly because of the age difference. Paulson has been asked to vouch for the age difference between her and Taylor recently, even though the couple is obviously pretty sound. Paulson told WNYC earlier this year about dating someone older than she was. But that kind of petty conversation doesn't seem to matter to the couple.

"I think there's a greater appreciation of time and what you have together and what's important, and it can make the little things seem very small," she said. Paulson added, "It puts a kind of sharp light mixed with a sort of diffused light on something. I can't say it any other way than there's a poignancy to it, and a heightened sense of time and the value of time."

I don't know about you, but the interplay between Paulson winning at the Emmys and Taylor watching from home screams #RelationshipGoals.