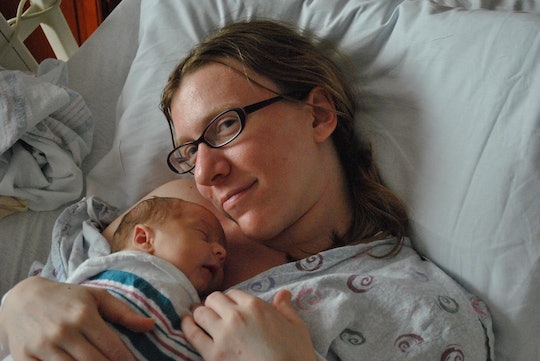 Before my daughter was born, I was determined to breastfeed. I picked a hospital that was baby friendly and had lactation support on staff. I signed up for a breastfeeding class (that later was canceled). I visited breastfeeding websites. I read post after post on the internet of mothers’ success stories and not-so-successful stories. I even wrote in my birth plan that I wanted to forgo an epidural, because I’d heard it could potentially interfere with breastfeeding. I wanted to be prepared for breastfeeding, so I did everything I could to feel that way. And all my research had only made me more determined to be great at it. Because I was so prepared, I didn’t think breastfeeding would hurt so badly or that I’d ever consider quitting breastfeeding because of the pain. All I knew was that I was determined to do it. The American Association of Pediatrics (AAP) recommends exclusively breastfeeding for six months, the World Health Organization (WHO) recommends breastfeeding for two. I heard stories of babies who were never sick because they breastfed. According to some women, their breast milk cured their babies’ cradle cap. Breastfeeding fixed baby acne. Breast milk was magical. And it was something I could do for my baby — for free.

After our initial bonding and breastfeeding period right after birth, my daughter went down for a nap and slept for five hours straight. My attempts to wake her to feed were rebuffed. When she finally woke up, her first night in this world was spent nursing every hour. She’d let out a pitiful little wail and I’d try to MacGyver a pillow solution that got her high enough to reach my boob, but not too high, and manhandle my nipple into her mouth. Sometimes I got lucky and that latch was pretty OK. But most of the time it wasn’t. I’d try again and again, but it never got any better and my baby got more and more frantic. After a while, I started calling a nurse for help every time I needed to breastfeed. Each nurse would offer tips, watch me try and eventually reach over and do it for me.

We were running out of options. Breastfeeding had to work.

By the time we were packing up to leave the hospital, my nipples were on fire and already showing signs of trauma. The lactation consultant had already mentioned the F-word: formula. She saw how much I was struggling, saw how much pain I was in already. But I was determined to continue breastfeeding. I wasn’t ready to give up that easily. It had only been three days. I was sure it’d get easier. Eventually. Plus, we were broke. I knew we didn’t have the means to buy formula. We were running out of options. Breastfeeding had to work.

Why was this so hard? Why couldn’t I get it right?

So clearly, I was doing something wrong. Every latch hurt. I’d stop and start over. Then we’d try again. It hurt. I tried making a C-shape with my hand, to encourage her chin down with my nipple, to get as much of my areola in her mouth as possible. Were her lips flanged? Top and bottom? No? Try again. Try again. Try again. And finally, when we were both crying, I let her latch however she wanted. I clenched my teeth, curled my toes, and let her get the milk she needed. I was frustrated and angry, at myself and at my daughter. Why was this so hard? Why couldn’t I get it right?

I felt like a failure. I kept trying to solve our problems and all I saw was that breastfeeding shouldn’t hurt. Well, it did. Which had to mean that whatever I was doing wasn’t working. But it was working. I was feeding my baby. By two weeks, she’d surpassed her birth weight. By two months, when my nipples were cracked and bleeding, she hit 10 pounds. And it wasn’t just cracked nipples. Dr. Google told me I was experiencing vasospasms, which happens when when the capillaries in your nipples contract, causing extreme pain. I couldn’t walk through the frozen food aisle without gasping in pain. I had plugged ducts and milk blebs, caused when skin grows over a milk duct opening and blocks it.

I was resentful of every woman who just loved breastfeeding, who gushed about this amazing bonding experience they were sharing with their babies. I dreaded the next feeding, had to psych myself up for every latch.

And I resented my husband when, trying to be helpful, he suggested pumping and bottle feeding. I glared at him when he tried to recommend an adjustment to my technique, and broke down in tears when he mentioned formula. Didn’t he understand that breastfeeding was about supply and demand? I felt like I had a new mother’s paranoia about supply and even though I could see the milk dripping out of the corners of her mouth, I worried that our bad latch meant an insufficient transfer of milk, leading to a dip in supply. In hindsight, I could have called my doctor. I could have found a support group nearby or contacted a lactation consultant. I should have done all those things, but in the midst of it, it felt like it was up to me to figure it out.

I’d been through the breastfeeding ringer. I was ready to be done.

I was counting down the months. One month in, only 11 more to go. Two months down, 10 to go. I just had to make it to a year. And then I hit four months. At four months, everything came to a head. Or rather, a boob. Although the cracks in my nipples were healing, slowly, but surely, I’d developed a rash around one nipple that hurt when my daughter latched on. And then, the kicker: a plugged duct. I’d dealt with plugged ducts before, but breastfeeding had always got things moving. This time, it wasn’t working. I nursed and pumped. I used disposable diapers wrapped around my breast as hot compresses. I massaged in hot showers. I breastfed more. Nothing worked. That “hit by a bus” feeling — the aches, fever, chills — settled over me. I had mastitis.

After a visit to the doctor, a prescription of antibiotics, and an anti-fungal for the rash, I was feeling better, but still counting down. I’d been through the breastfeeding ringer. I was ready to be done.

Despite all our hardships, I was sad when it ended, sad that my excuse for a quiet cuddle with my crazy toddler was over.

But then suddenly, things clicked. The latch I had fought so hard to fix was fixed. I didn’t have to fight every time to get it right. It was just right. The nipple trauma healed. The fungal infection cleared up and I stopped getting plugged ducts. And one day I realized I wasn’t counting down anymore.

I ended up nursing my daughter for 22 months, blowing through the initial goal I set for myself. By the time our nursing relationship ended, we were only nursing once a day, at bedtime. I was three months pregnant with her brother and back to experiencing pain with every latch. She was too busy bouncing off the walls to sit down and breastfeed. And despite all our hardships, I was sad when it ended, sad that my excuse for a quiet cuddle with my crazy toddler was over.

I’m eight months into my second breastfeeding journey and going in, I was prepared to struggle through those early days again. Fortunately, the struggles have been minimal. He was much bigger than my daughter at birth, a hefty 9 lbs., 6 oz., so getting his not-so-little mouth around my never-going-to-be-flat-again nipple wasn’t as hard. We took my son to the ENT to check for tongue and lip ties. She even checked my daughter to see if that may have been the issue. And I attended local Breastfeeding USA meetings and received mother-to-mother support when issues did creep up.

This time, I knew that I could make it through whatever obstacles that came my way. This time, I trusted my baby and my body. I knew that the latch would sort itself out and it did. The pain of those first four months is gone, the memories have faded over time, but the pride has not. Breastfeeding for 22 months was one of the most difficult and painful experience of my life. But it’s also one I’m most proud of.