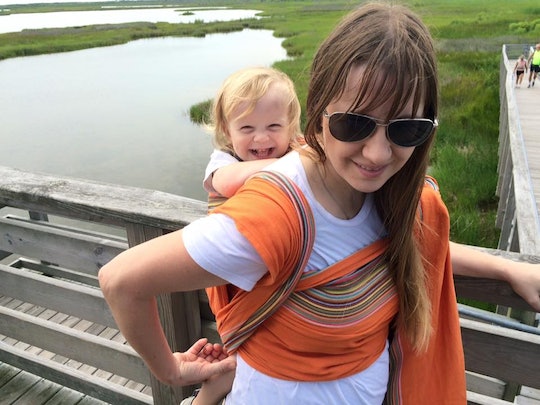 Sunny, my youngest and third son, was born screaming. I tried to shush him, but to no avail. So I cupped my nipple and moved him toward it. He latched greedily, and suddenly, silence fell. He nursed expertly, clicking occasionally, but he stayed latched. Just minutes old, and he felt like an old pro immediately. The nurses moved around us, cleaning us both up, but Sunny kept going. He nursed for over an hour. Back in the room, Sunny kept on nursing. One breast, then the other. One breast, then the other. He had a terrible class 4 anterior tongue and lip ties (that we lasered off), and couldn't transfer milk well, but no one in the hospital knew. It was the one breastfeeding decision I don't regret making. We practiced kangaroo care, so I latched him often. As a gestational diabetic, I had made sure to have milk on hand in case mine didn’t come in right away (and because I was still breastfeeding my other son, I was able to pump beforehand). But the nurse claimed their freezer was only for NICU moms, and they have didn’t room for another. 20 ounces of milk, so she dumped it.

We were discharged early, and we brought baby Sunny home to his two big brothers. He and I retired to the back bedroom to nurse and sleep. After we'd settled in, I noticed Sunny wasn’t peeing. With all the nursing he was doing, he should have been peeing like a faucet. But there was nothing. I knew, from my other two pregnancies, that babies on their first day of life should pee only once. Thankfully, Sunny squeaked in at the 24-hour mark, but it wasn't enough to make my worries subside.

Meanwhile, my nipples had started to hurt. Normal newborn chaffing, I thought, though I’d never had chaffing with my other babies. Sunny kept nursing a lot, and not peeing. On his second day, he barely peed twice, and nursing hurt so badly that I put Orajel on my nipples before latching. I’d nursed two other babies and never felt like this, so I knew something was wrong. I started Googling, and I popped open Sunny’s mouth admit a wail of protests from my son. I saw a thick strand of tissue holding his lip to his gum, and another thick band holding his tongue to the bottom of his mouth. According to the Mayo Clinic, a tongue tie is a condition present at birth that affects a baby's feeding ability, as well as their ability to move their tongues. An upper lip tie occurs when the upper lip is attached to the upper gum, according to Fauquier Ear Nose & Throat Consultants of Virginia. An upper lip tie may prevent baby's ability to "curl up" or "flare out" in order to properly seal with the breast for successful breastfeeding. Based on what I saw in my search, it looked like Sunny had a textbook stage four tongue and lip tie — the most severe. And treatment meant getting it cut or lasered immediately in order to continue breastfeeding.

I told him what I saw — that my son looked to have an incredibly severe tongue and lip tie, and that it was hurting our ability to breastfeed. He called back 10 minutes later.

I asked on our local La Leche page and waited anxiously to see what the leaders and other parents said. Everything came back to one doctor, the only one in a two-hour radius from our home who lasered tongue ties. It was a Saturday, but I called him anyway, and got his voicemail: "If this is a dental emergency, please leave a message and we will call you back promptly."

Is this a dental emergency? I wondered. I took the chance. I told him what I saw — that my son looked to have an incredibly severe tongue and lip tie, and that it was hurting our ability to breastfeed. He called back 10 minutes later. He didn’t have an open appointment, but said that we could come in on Monday at 7 a.m., before the rest of the patients, and he’d laser Sunny’s ties. He didn’t take our insurance, and we’d have to pay out of pocket. But we didn’t care. This needed done.

We spent the weekend counting diapers and nursing and praying. I found donor milk for Sunny and we gave him a syringe-full once. He couldn't transfer enough milk to keep up with his needs, though. I had it, he wanted it, but the two couldn't meet. I cried; I couldn’t even feed my own baby. We kept him eating just enough to pee. Thankfully, we managed to make it to Monday morning.

The procedure saved our breastfeeding relationship. It gave me the future I'd hoped we'd have together, the same I'd had with my two older sons, and the same one I wanted with Sunny.

We didn’t have anyone to watch my older sons, so we took them with us in the minivan with iPads. My husband went in to sign paperwork, then took the kids while I brought in the baby. They explained the procedure to me. “Do you want to be here for it, or do you want to leave?” the radiant-toothed doctor asked.

I swallowed hard and said I’d rather be there. He was my 4-day-old baby. They reassured me they’d performed this procedure to a 2 day old, but Sunny was the second-youngest patient they'd seen. “It doesn’t even hurt them,” he said.

I held his body while the nurse held his head. And though Sunny will never be able to tell me, it was heartbreaking just to watch this happen. The doctor literally lasered inside his mouth. Sunny screamed, a pain scream, a horrible, horrible pain scream, while they ran a laser over his lip tie, then under his tongue. “Hold on baby, hold on,” I said over and over. Two minutes later, the doctor had finished. I snatched Sunny up. "You can hang out here as long as you want and try to nurse him," the doctor said. So I did. And his latch, though it wasn’t perfect, was immediately better. His latch hurt less. Much, much, much better.

The lactation consultant pronounced us, six days postpartum and two days post-procedure, to be breastfeeding and peeing just fine. Sunny was taking in enough milk per feed, and had gained since his birth. The procedure had been a success.

We had to do sucking exercises in the next few days to help him learn to nurse normally. I’d put my finger in Sunny's mouth, against the top of it, and encourage him to suck normally. His latch began to normalize, and his pee output increased. Even though things were better, we still had to stretch Sunny's lasered area. We had to flip his lip up and run our finger under his tongue to make sure they didn’t re-adhere. If they did, we’d have to laser it all over again. I felt sick just thinking about it, so I did the stretches diligently, even though they made him scream and made me cry. The procedure saved our breastfeeding relationship. It gave me the future I'd hoped we'd have together, the same I'd had with my two older sons, the same one I wanted with Sunny. We had to do them for two long weeks until the laser cuts healed.

The lactation consultant pronounced us, six days postpartum and two days post-procedure, to be breastfeeding and peeing just fine. Sunny was taking in enough milk per feed, and had gained since his birth. The procedure had been a success. His tongue and lip ties were gone, and he was breastfeeding like a normal baby. Finally.

My nipples took a few days to heal, because I was still nursing, and Sunny's latch wasn't perfect for about a week. But Sunny was OK, and that’s what mattered. We were lucky. If we hadn’t had access or knowledge of what a tongue and lip tie were, I wouldn’t have discovered Sunny had it. No one in the hospital had, and his ties were severe. If we hadn’t have had the money to pay up-front for the procedure (which wasn’t remotely cheap), we wouldn’t have been able to keep nursing. If I hadn't known, I would've had to quit breastfeeding. And it would have broken my heart, but I’d have done it for my baby — the same way I held him down for the procedure. I'm so grateful we were able to get it done, and I'm grateful for the doctor who wielded the laser. He enabled me to breastfeed. And for that, I'll always be thankful.

More Like This
Here’s What To Do If Your Baby’s Nose Bleeds After Suctioning
Can You Give A Sleeping Baby A Breathing Treatment? Experts Explain
Celebrate Baby's First Christmas With These 40 Instagram Captions
7 Baby Name Generators To Try