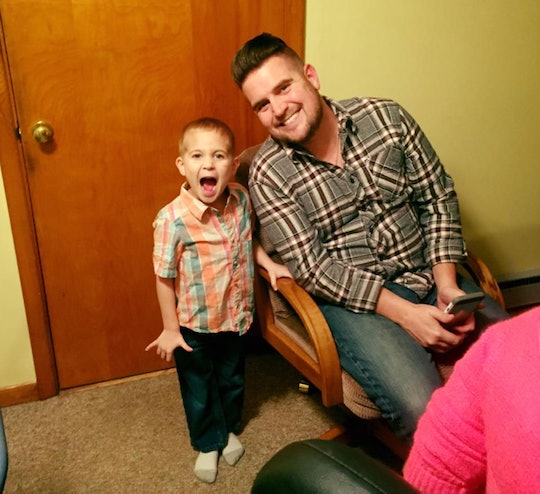 Honestly, I Could Absolutely Do Motherhood Without My Partner

From the moment my first child was born , over 11 years ago, my life has revolved around motherhood. Sure, I have other roles. I'm a partner, daughter, sister, author, runner, and obsessive worrier. But parenting is the bar for which all other roles are set. I knew I would throw myself into motherhood the moment that pregnancy test turned positive, and the years since have proved that I'm a capable, loving, trustworthy parent. In fact, I know I could do motherhood without my partner, too. I don't need him to be the mom my children want or need.

My partner and I have been together 14 years, which is almost half my life. When I found out I was pregnant, however, that almost ended our relationship. The pregnancy was unplanned, our courtship was relatively new, and we weren't ready to be parents, financially or emotionally. But once our little girl entered the world our priorities shifted, and we learned how to be better parents to her, and better partners to each other. We faced the challenges of parenthood head-on, together.

To be fair, I know there are moments when my partner can confidently say he can do the whole dad thing without me. One of those moments, I'm certain, is when I was suffering from postpartum depression. When I couldn't drag myself out of bed, he got up in the night and fed our new baby. When I failed to bond with my daughter, he stepped in. When I cried for hours at a time and suffered from suicidal ideations, he was the go-to parent who provided the necessities our daughter couldn't live without.

Once I was diagnosed and started treatment, though, he subconsciously relinquished his responsibilities. Before I knew it I was the primary parent, and it's been that way ever since. I decided to stay at home with my child, simply because I didn't trust anyone else to care for her the way I could. But we weren't financially stable enough to survive on just one income, so I also had to take on extra jobs and find ways to supplement our income by working from home. I was working, and shouldering the responsibilities of a full-time mom, simultaneously. And before I knew it, that became my new normal.

He's just not around enough to be as invested in the day-to-day operations of our family, which puts me in charge of everything.

As a result, and through no fault of his own, my hard-working husband misses out on most of memories my kids and I have create. He works long hours so, by the end of a shift, he's so zoned-out there's no way he has the energy to engage and be present. So our parenting style has a singular vision: mine. When he's so lost in his phone so he can decompress, I'm busy tending to the children or cooking or cleaning or doing any number of necessary things in order to make sure our household remains intact. He's just not around enough to be as invested in the day-to-day operations of our family, which puts me in charge of everything. Getting the kids to and from school, grocery shopping and cooking all meals, cleaning the house, running errands, and maintaining a career — I do it all, without him.

In other words, yes, I could absolutely do the whole motherhood thing without my partner. Actually, I have done it without him. When he took an out-of-state job and moved two months before the rest of us did, I was parenting entirely on my own. I'm not a single parent, by any means, and two months of parenting on my own while my parenting partner is away is nothing compared to the struggles and challenges single parents face. But for those two months I got a taste of what it would be like to parent entirely on my own, and while it was difficult, I realized it wasn't impossible.

I've also realized, however, that while my partner might not be engaged as I am, he is still there. When my life is at its most chaotic, my partner has been there to pick up the slack. It might not seem like much, but on the days when it's easy to lose sight of his contributions to the family, and to our parenting responsibilities, I realize that he has also made it possible for me to be as invested in our children as I have always planned to be. It's because of his hard work that I'm able to be a work-from-home mother. It's because of his support that I'm able to also be the best daughter, sister, author, runner, and, yes, obsessive worrier I can be. So, yes, while I know I'm capable of parenting alone, I wouldn't want to go through this journey without him.