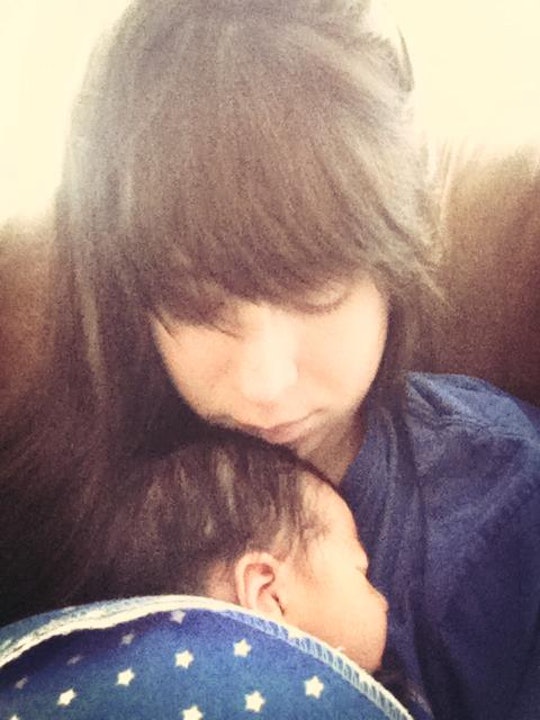 I Was Scared To Talk About My Postpartum Depression — Until Now

When I came home from the hospital, two days after giving birth to a son I had to leave behind, and a son I was able to bring home, I felt both within and without. I can remember the exhaustion and the nervousness and the excitement; there weren’t doctors or nurses close by so any mishaps or mistakes would be both my partner's and my own fault. I remember arguing with my mother about whether or not I could give my son a pacifier — she suggested they'd help soothe him to sleep, but I was adamant that we couldn’t because I wanted to remain successful at breastfeeding. I remember being too afraid to sleep, especially when my son slept. What if he stopped breathing? What if he spit up and choked on it? What if something fell on him? What if?

I also remember a relentless cloud of fatigue that surpassed anything physical. Even though my eyelids were heavy and my body was aching, something inside of me seemed stalled. I was adrift in a sea of fog; a haze that loitered between me and everyone around me, including my son. I could hold him, but I wasn’t really touching him. I could look at him, but I wasn’t really seeing him. I could kiss him and tell him I loved him, and even though I know I meant it, I wasn’t really saying the words or feeling the love so many had promised I’d feel. I was suffering from postpartum depression, and because I didn't talk about my postpartum depression, I suffered alone.

I knew I was depressed. I had read enough about postpartum depression, especially after one of our twin sons died at 19 weeks old, to identify the signs and symptoms. I knew I needed to talk to my partner and consult a doctor, but I didn’t. I couldn’t. I was afraid and, mostly, ashamed. I was ashamed because my partner and I didn’t plan our pregnancy. We weren’t, and still aren’t, married. We weren’t together for very long, or however long people think a couple should be together before they start procreating. I'd been pregnant before, at 22, but that pregnancy ended in an early abortion.

When one of my twin sons died inside of me, I couldn't help but remember the naysayers and their words of discontent. Everything they had assumed — the very worst of their assumptions — had come true.

I was ashamed because when we announced our pregnancy, although many were happy and supportive, many more doubted us. They doubted me. People whispered about my eventual shortcomings, about the impending doom my partner and I had willfully thrown ourselves towards. I wasn’t the “mothering” type, and I was not only ruining my life by deciding to become one, I was ruining another, potential life, too. I could hear and feel and sometimes was confronted by people who didn’t think I should be a mother.

I was ashamed because when one of my twin sons died inside of me, I couldn't help but remember the naysayers and their words of discontent. Everything they had assumed — the very worst of their assumptions — had come true. A life was lost, and even though the rational part of my pregnancy brain knew it wasn't my fault, the majority of it did not.

When wave after wave of a relentless postpartum depression raised tides of sadness and despair, I held my breath and let myself go under. I didn’t reach out for help or talk about my mental state or even hint at an underlying problem because I was too worried about how I would look.

So when wave after wave of a relentless postpartum depression raised tides of sadness and despair, I held my breath and let myself go under. I didn’t reach out for help or talk about my mental state or even hint at an underlying problem because I was too worried about how I would look. I was too focused on how a mother should act and should feel instead of how I was acting and how I did feel. I was too obsessed with fulfilling the predetermined social role of what a mom should be — one I already thought I'd failed at because my son had died — to allow myself to own the mother I actually was, postpartum depression and all.

An estimated 15 percent of women experience postpartum depression (PPD) after they’ve had a child, while one in 1,000 women develop the more serious condition called postpartum psychosis. A paper published in 2011 in the British Journal of Psychiatry found that out of the 2,823 women surveyed who had miscarriages, about 15 percent experienced clinically significant depression. If I felt the need to have a reason or explanation for my PPD, I am sure I could have pointed to the loss of my son and held my head high. But the truth is, I didn't and still don't need a reason or an explanation for my very real, very valid feelings of overwhelming depression. Those feelings — the kind that kept me within and without, often times watching myself mothering but never truly feeling like one — are part of my experience. The fear that I’d lose another son, even though he was alive outside of my body, giggling and squirming and eating; the relentless feelings of an innate inability, like I'd be doing my son a disservice getting out of bed because someone far more capable could and should tend to him; the weight of overwhelming responsibility that kept me on the couch or in my home — they’ve all made me the vibrant, loving, unapologetic mother I am today.

My postpartum depression helped me realize that I shouldn’t have to conceal the mother I am just because I’m not the mother certain people think I should be. I might make difference choices when it comes to how I feed my kid, where my kid sleeps, how I discipline my child, or any number of parenting decisions, and I might have been depressed after my son was born rather than happy, but still I am the best mother my son could ever need.

I'm so tired of hiding the fact that I suffered from postpartum depression. I can't hide the truth anymore — and frankly, I shouldn't have to. I did struggle with postpartum depression when my son was born, but not once did it keep me from loving my son, or from being a good mom. On days when I don't feel I am enough, I remember that. And then I go back to loving my kid with everything I've got.

More Like This
30 Marvelous Baby Boy Names That Start With “M”
53 Rainbow Baby Names Filled With Hope
Here's Why You Should Avoid Oral Sex If You Have Placenta Previa
Can You Have Sex With Placenta Previa? Experts Explain