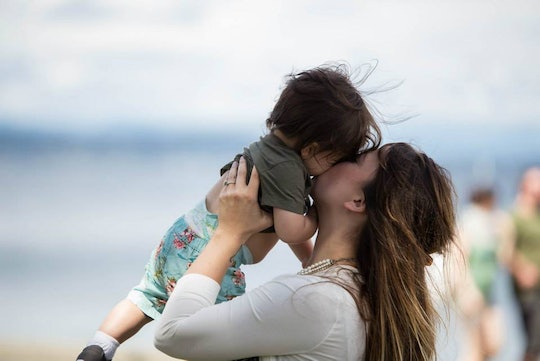 I’m sitting on my couch staring at my computer screen, hands resting softly on the keys of an over-heated laptop. My son is playing on our living room floor, giggling to himself for reasons unknown and flipping through his baby books; pointing and gibbering and content. I’m supposed to be writing about what it's like to lose a child, but as I look at my son, then the computer screen, and then my son again, there are tears instead of words. I'm trying to articulate the pain and anguish and all-encompassing sense of failure I felt losing a child but I’m, instead, lost.

I’m in a world that doesn’t exist.

When my partner and I first found out I was pregnant with twins, we were both equally more shocked than excited. Twins don’t run in either of our families, so the chances of this happening were already so very small. But when the gravity of our future situation settled, we were nothing short of thrilled. We bought two of everything immediately: two sets of onesies, two sets of toys, two sets of bottles, and two sets of blankets.

Sure, we were overwhelmed and with no family in our immediate vicinity — I'm from Anchorage, Alaska and my partner is from Tomahawk, Wisconsin, both a far drive from Seattle, Washington — we were at somewhat (read: a lot) of a loss as to how we were going to make this work, but we were happy. We were just ... happy. Happy at the chance to do something so rare. Happy at the thought of having two sons all at once. Happy that we were going to be the parents of twins and were going to see our boys grow up with a best friend from the very first day they were born.

But as quickly as that happiness came, it vanished.

I was flying to see my brother and mother in Southern California. My brother is a member of our armed forces and was close to deploying, so we wanted to say goodbye. My partner stayed behind because of work, so I traveled alone. I was 19 weeks pregnant and, with twins, it was obvious I was carrying babies in my belly. People were nice and accommodating and quick to ask questions about due dates and cravings. The woman who sat next to me on the plane showed me pictures of her daughter, who was also pregnant. That's arguably one of the best parts about being pregnant: you get to feel connected with perfect strangers because every pregnancy, while unique, is a shared experience that many women have in common.

I saw one of my sons and his still heart, and I just knew: I had lost one of my twin boys.

Then something happened. I felt odd and strange and incredibly nauseous and before I knew it, I was waking up to a flight attendant, telling me everything was going to be OK.

I had passed out and convulsed. I was cared for on the plane, and then escorted off and met by local medics. I was then taken to the emergency room of a nearby hospital. They ran tests, gave me fluids, and finally, I had an ultrasound.

There was a small chance that my body would pass my now deceased baby, but my doctors' (and my own) hope was that my body would continue to carry the second twin; his placenta would be absorbed and the other baby wouldn't be in danger of being rejected too. I was told to watch for intense bleeding and cramps and so while those first few days were filled with an incredibly devastating sadness, they were also filled with anxiety and fear. I had lost one son. Would I lose the other?

Once days turned into weeks and I knew I wouldn't be passing one twin until I gave birth to the other, I was acutely aware that I was carrying life and death inside of me, simultaneously. And while it was difficult and, at times, so overwhelmingly sad, I was thankful that my body continued to do what I silently asked of it, so that my remaining son would be as safe as physically possible.

When we gave away one set of clothes or one set of toys or one set of bottles, I remembered that I had one child who was alive, and one child who wasn’t. When I thought about playing with my son or throwing a baseball with my son or singing him to sleep, I had to redirect my brain so that it would only think of one child, not two. I had to create new plans and a new future and in doing so, I had to say goodbye to everything we'd planned and everything we thought our future would be and everything I thought we had, but never really had at all.

We put the pictures of our twin boys in a drawer, proud of ourselves for doing what was necessary to move forward and be healthy mentally and emotionally for our future child, and simultaneously ashamed that we didn’t have the strength to look at both of them.

Which is why losing a child can best be described as a cruel set of essential yet daunting choices, forced upon you for reasons you will never understand. It’s self-preservation, which feeds into self-hate because you’re constantly reminded that you’re not as unbreakable as you thought. It’s saying goodbye to something you never had. It’s living a fraction of a life that never was. When you’re happy and in the middle of a task or going about a routine, all of a sudden the weight of a loss overwhelms you. It’s knowing that there could have been something more, because you felt it and you have pictures of it and it was real, but you don't get the chance to know that reality.

I look up from my computer and sure enough, my son is still playing on our living room floor, giggling for reasons unknown and flipping through his baby books; pointing, laughing, and content.

He would have loved to have a twin brother to play with — and I carry that sadness with me daily. But I look at him now, happy and learning, and exploring a world that's still entirely new to him, and I remind myself that there is life beyond loss.

There is a world outside of the world I’ll never know.