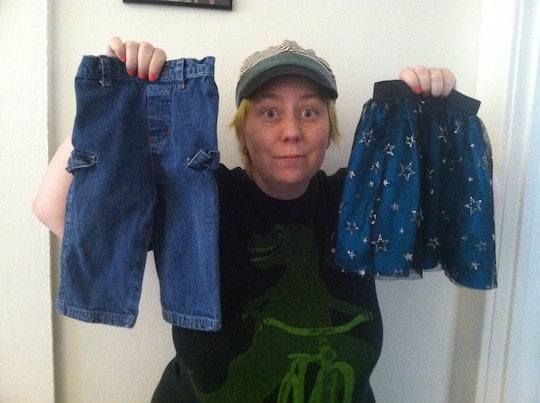 My wife and I have always wanted our child to have complete gender freedom, to be able to wear what he wants, do what he wants, and express himself however feels best to him. He’s just a baby right now, but as he grows, we want him to know that he can wear pink or blue, skirts or pants, frills or racing stripes. We’re pretty sure that one of the best ways to foster that freedom is to introduce him to a wide variety of options from a young age, and so we do not exclusively shop in the “boys” section, even though our son is male. Of course, the rest of the world doesn’t always agree with us, and it can be intimidating to deal with other people’s reactions to any less than typical parenting decisions.

At home, our kid wears a variety of clothing, just like we do! But when we go out? If I’m being honest, we tend to try to keep it fairly socially acceptable. Although he has several dresses, at 5 months old he’s still never worn a dress outside of our home.

So I took a deep breath, and set out to find out what does happen when you put your infant son in dresses and skirts in public, hoping to get over some of my own gender hang ups along the way. How bad could it really be? I was going to find out.

For one week I dressed my son in exclusively dresses and skirts, aka traditionally feminine attire. I did not add any additional gender signifiers (no frilly baby headbands, for example). During the week I tried to put him, and myself, into as many different social situations as possible. My only rules for dealing with these situations was that I was not allowed to play along if other people looked at his outfit and assumed he was a girl. I didn’t have to scream, “this is a boy child in a dress!” but also if someone said, “oh, what a pretty little girl!” I would gently correct them, rather than pretend.

This is how it went.

To be honest, this is the one I was the most nervous about. I mean, hardware stores are so incredibly butch. There was only one other customer in the store. There were about five men working, who all looked like they change their own oil. There was my 6-month-old son, in purple and blue dress.

A friend was holding him while I looked for the things I needed, and we were chatting. I kept noticing every time I referred to my son as “he” and imagining that the comments were about to start rolling in. But literally nothing happened. No one ever said anything. I even had to ask for help to find a certain kind of hook, and the silver-haired man who showed me where they were seemed not to see my kid at all. I started to feel like he was wearing an invisibility cloak, rather than a dress. It was really weird because people almost always talk to him when we go out.

Maybe the kind of man who wants to work in a hardware store is not the kind of man who gushes over a cute baby (though I doubt that, based on the men I’ve known)? Maybe they really were disturbed by my kid’s outfit but didn’t want to say anything? Maybe they just weren’t interested at all? I’ll never know, and the not knowing bothers me a little. Mostly though, I was just relieved not to be hassled about it, and relieved for it to be over.

I made dinner for my wife’s parents, and I almost chickened out at the last minute and put him back in pants, just in case they thought we were taking our “liberal parenting” “too far.” His grandparents have been wonderful about trying to understand the way that we parent, even though in many areas we are doing things completely differently than how they did, but I was still all nerves. If a stranger mocks his outfit, that’s one thing, but this was family! I put him in a dress that I made for him out of an old t-shirt, and peach leggings covered in pink hearts.

They fussed over him just like they normally do. They brought him a toy. They took pictures with him. They even commented on how cute the heart leggings were. It ended up being a really great, really comfortable evening with family. I realized that maybe I haven’t given them enough credit. They’re adults who are capable of learning and growing, just like I am, and they love their grandchild, no matter what he’s wearing.

When we ride the bus with our kid, he’s typically in a baby carrier (an Ergo or Moby) so I wasn’t totally sure how well his outfit would read, since he was strapped to my wife with a ton of orange fabric. But we set out to explore anyway. We took two bus rides with him that day. On the first one, no one said a word to us. But on our way home, the bus was full of chatty women. They wanted to know how old he was. They wanted to know “what are you feeding him?” They wanted to tell us about their kids and grandkids.

And then they wanted to know if he was a boy or a girl.

A young woman started to ask, and then saw the pink collar of his dress sticking out, “Oh, a girl!” she said, answering the question for herself. My wife stepped in without missing a beat. “Actually he’s a boy, he’s just wearing pink today. We think colors are for everyone.”

Before we knew what was happening, about five women joined in the conversation, all affirming that it doesn’t matter what color you wear, and that he would be beautiful and handsome no matter what he wore. I just sat quietly, it was the most surprising thing for me. I hear people passing judgments about others on public transit all the time, and here was something that I assumed would definitely be labeled as “weird” being totally supported. My kid was smiling and looking around at everyone, enjoying the attention. I was starting to feel like maybe I was the one who was too uptight about this stuff!

My wife and I took him out to lunch at our favorite local brewery, which also makes excellent pizza. He looked cute in his sweater dress and stripe-y tights, and we passed him back and forth from lap to lap while we ate our meal. Because it was lunchtime, they weren’t that busy. The bartender came over to check on our table and said “hey bud, how you doing, little guy?” like people do to little boys. Then he said, “That’s a real cute dress, did one of you make it?”

My wife and I just looked at each other and smiled. “No,” I said, “it’s from the thrift store.” And then we had a perfectly pleasant conversation about thrifting clothes for babies. He repeated, again, that it was a nice dress. It sounded genuine enough, and he seemed to have picked up that our son is male. I thought I detected a tiny note of nervousness in his voice, but I honestly can’t be sure. It was a great experience, all around.

Like most of my parent friends, I put pictures of my kid on Facebook fairly regularly. Friends and relatives, especially those who don’t live in the same town as us, like to see how he’s growing. During the week of dresses, I made a point to upload a few shots of him in his femme attire (especially on days we didn’t make it out of the house). No one commented on any of his femme outfits, which at first glance may seem like confirmation of acceptance.

On closer examination, photos of my kid in pants got 5.6 likes on average, while photos of him in dresses/skirts got 3.7 likes on average, and the only dress photo to get more than three likes (which drove that average up quite a lot) was in a dress that one could read as a baggy t-shirt, if you wanted to. It seemed to be that while people didn’t have anything explicitly negative to say about our son wearing dresses, they weren’t about to put their stamp of approval on it by “liking” it either.

I honestly don’t know what I was so afraid of. I mean, I guess I was afraid that people would attempt to shame me (or him) to my face for skirting (ha!) gender conventions. But that simply did not happen. People were nice, it was a pleasant surprise.

If I had to guess, I’d say that many of the people we encountered probably still think little boys shouldn’t wear dresses, and probably thought our family was a little bit weird. But most people are also too polite to say so, which honestly really surprised me. I’m not sure why everyone held their tongue on the dress front, but they did, and it was great. It makes our lives easier if we can parent the way we think is best without constantly fending off negative reactions!

Throughout the experiment, I realized that I was looking at my child differently. It was easier to push back against all kinds of other gender norms, once I took the big step of putting a dress on him every single day. Adjectives typically used for girl babies, like beautiful, sweet, and kind, rolled off my tongue more easily, and I was beginning to have a more rounded view of my baby as a person. It’s funny because, if you had asked me before, I would have said that I absolutely saw him as a person first and a boy second, but I think I really discovered and challenged my own biases. Also, having so many positive experiences gave both my wife and I more confidence, not in our own parenting decisions necessarily, but in our ability to make those decisions publicly.