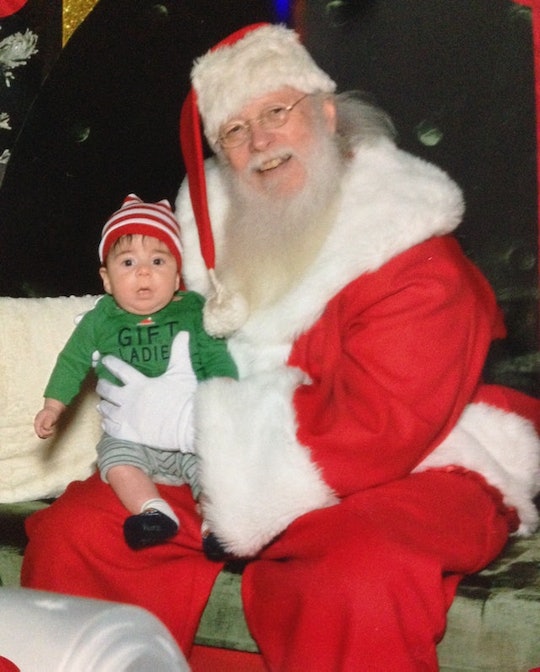 I've never been a big fan of the holiday season. But because I have a son, my little family of three has found its own new ways to enjoy and redefine the Christmas season. For us, that involves taking our kid to sit on Santa's lap for pictures. My kid has helped changed my feelings on the holidays, and the new traditions we've started (and enjoyed) as a relatively young family have made the holiday worth celebrating.

Last year we had our then-4-month-old son take his picture with Santa, and it was relatively painless. He looks more perplexed than upset, and when he started crying shortly after the photographer snapped the picture, I swooped him up, paid for the photos, and we were on our way. We distributed them to grandparents, great-grandparents, friends, and relatives, and not only did everyone love them, they were grateful to have them, too. Because we're so far away from, well, everyone (we live in Seattle; I'm from Alaska, and my partner is from Wisconsin), our family doesn't see our son that often. So pictures like this is how we make everyone part of his story. And they all appreciated a piece of a memory they didn't have the chance to be a part of.

So we knew that this year, part of their gifts would include another round of Santa pictures.

We stood in line for over an hour, an unthinkable thing to ask of an adult, let alone a toddler. Once it was our turn, we sat our son down on Santa and after a few seconds of seeing the same perplexed face we saw the previous year, he began to cry. Like the previous year, I swooped in, picked him up, and said we were done. The photographer was able to snap one picture of our son, who looked, by the way, less-than-thrilled to be there. She asked if we wanted to try again, but I said no. A teary-eyed picture was definitely not the goal, but it would have to do.

I posted the picture on Facebook (duh), juxtaposing it with last year's by showing a side-by-side comparison. Turns out that was a big mistake.

Not long after, a friend of a friend posted a status update going on and on about how "disgusting" it was that parents make their children sit on a stranger's lap, laugh at them when they cry, and essentially perpetuate rape culture by taking away their child's right to feel safe, secure, and trusting of their parents. The update ended with "sorry, not sorry." Though it wasn't directly posted for me to see or even tagged with my name, it still stung. We don't know each other well. We don't talk, we don't hang out, and we see each other rarely, sometimes at friends' parties, others at get-togethers.

We certainly don't know each other well enough to judge each other's choices or our parenting styles. Her comment — whether directed at me or not — cut me off at the knees. And instead of letting the comment roll of my shoulders, I crumbled. I cried. I read the comments, which included one from our mutual friend who claimed she'd also "never do something like that" because of how "hurtful it can be to toddlers." She cited "stranger danger" (which, for the record, is a completely reasonable and valid fear). I sat in my seat, stunned, unable to look away.

We're well out of the brand-new baby stage, but I'm still a brand-new mom. I've never done this before. I am confident in the choices I make as his mom, but how do I know if I'm always making the right ones? Much like my son, I'm still learning what's right and wrong. I constantly second-guess myself. I carry this enormous responsibility on my shoulders — to raise a respectful, kind, responsible, giving, wonderful son — and I know I didn't do anything wrong by putting him on Santa's lap for two seconds.

I felt compelled to respond, and a few back-and-forths later, we were very clearly not on the same page (or even in the same book) — I was simply trying to set up a nice tradition for my son and our family as we spend holidays away from the people we love most while, to her, I was not-so-simply undermining women’s rights.

I do my best to protect my son and to make choices that will not put him in harm's way. I care for him and take care of him. I kiss bumps and bruises, I snuggle and squeeze, I always hold him tighter and longer than I did the day before. I love him unconditionally. I respect him. And I do my best every single day to raise him right. In my opinion, trying out Santa was similar to the way we try out friends and family: If our son cries when he's in their arms, we take him back. When he cried with Santa, we did the same.

Parenting is all about choices, and sitting on Santa's lap was one I made for my son that day. I don't shame other women's choices — especially if they have kids —and before this I would've never dared to think someone would feel so strongly about my own. Not once was my son in harm's way. He was safe — I was less than two steps away — and when he realized this was something he didn't want, I picked him up and that was that. I didn't let him cry. I didn't leave him. I didn't dismiss his feelings. I responded.

Next Christmas will, believe it or not, be here before we know it. Our family members will still be far away, and even though I don't know what our plans will be or where we'll end up celebrating, I do know that we'll try our hand at Santa pictures yet again. If my son cries like he did this year, I'll pick him up, and that will be that. If the photographer is lucky enough to snap a photo in time, we'll once again send it to family and friends no matter if he's smiling or not. We'll give them yet another piece of a memory they weren't here to share.

And we'll be OK with that.