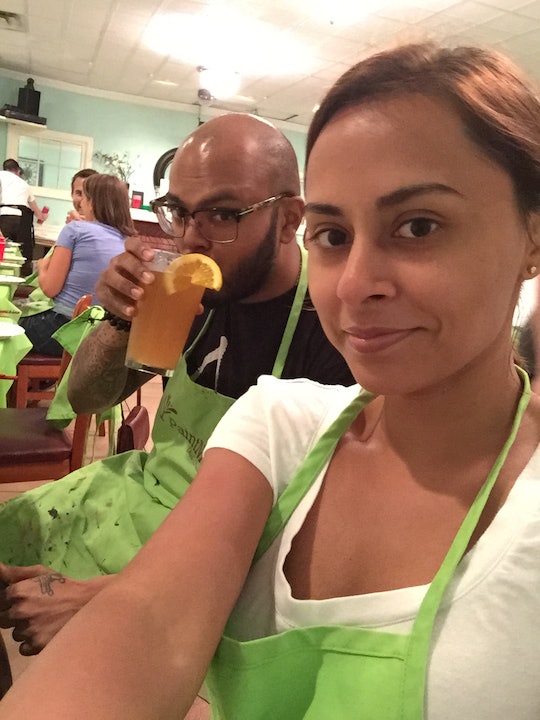 Immediately after our wedding, my husband and I decided we were ready for a baby. After our honeymoon, I stopped taking birth control. During those first few months we didn't expect to get pregnant right away and were just having fun trying to conceive. Sex was actually more exciting. There was something about knowing we ~might~ be making a baby that made sex more intense, made us feel more connected. But as each month passed without my getting pregnant, I began to worry just a bit.

I read a few articles and Googled ways to get pregnant faster and felt relieved that there was a slew of information (numbered lists!) out there. I also reached out to friends and family members in the know. I was told to try various positions to help conception or to hold my legs in the air after sex so that the sperm had a better chance of fertilizing one of my eggs. People also recommended vitamins, diets, and exercise. I tried it all. And sex was still fun, because I was confident that one of those techniques would work.

After six months of trying, I couldn't help but to wonder if we were doing something wrong. More so, was there something wrong with me? I visited my doctor who told me I just needed to relax and that there was no cause for concern unless we had been trying for a year or more. So we continued. But after a few more months of trying, the newfound connection I had felt when we first started TTC was starting to dissipate.

At the one-year mark, sex had become more like a complicated mathematical equation, and I hate math.

At the one-year mark, sex had become more like a complicated mathematical equation, and I hate math. I started to consider the time of day, duration, frequency, positions, and even the temperature of the room when we were having sex. Were we doing it too much? Not enough? I wondered. Instead of having fun, I was a mess. I was working out theories and experiments in my head.

Eventually I was diagnosed with PCOS, which is a hormone imbalance that causes fertility issues. And although it was great to finally know the cause, TTC was still difficult. In order to get pregnant, I had to take medication to help me ovulate and track my basal body temperature so I could tell if and when I would ovulate. I kept a thermometer and cell phone beside my bed so I could keep a record of my basal body temperature and how often we were having sex. Eventually, sex was determined by these crazy equations instead of our desire.

If I'm honest, I hated having sex when we were TTC, because it was no longer spontaneous — it was very calculated and planned. I just wanted to get pregnant so badly that it was my only focus. Every time we had sex, it was strategic instead of in the moment. I think my husband started to pick up on that. And it wasn't fun for him either — it's a lot of pressure on a person to perform. I’m sure my nagging for sex to reproduce instead because of being in the mood must’ve ruined the moment quite often.

An orgasm wasn’t even a goal, I just planned sex based on my odds of getting pregnant.

My husband wanted me to relax, he wanted our sex life to be the way it was before we were trying to have a baby. He wanted sex to be enjoyable, not work. Everyone kept telling me to relax, that I would get pregnant if I just "let it happen," but I knew getting pregnant would require a lot of work and I wasn't wrong. It's hard to enjoy the process of making a baby after years of trying with no luck. It was difficult to focus on pleasure when all I could think about was my ovulation cycle and my basal body temperature. An orgasm wasn’t even a goal, I just planned sex based on my odds of getting pregnant.

I was constantly worried that I would never get pregnant. We became robots instead of lovers. The ovulation tracking app on my phone dictated when we should have sex and even though my crazy schedule eventually led to me getting pregnant after two and a bit years, it really took the excitement out of the whole process. A lot of people assume that trying to conceive means a wild boom time of lots of sex, but when it's based on logistics over desire, it can feel like a chore.

I wish I wasn't such a drill sergeant about sex when we were TTC, because I ruined sex for my husband and I during that time in our marriage.