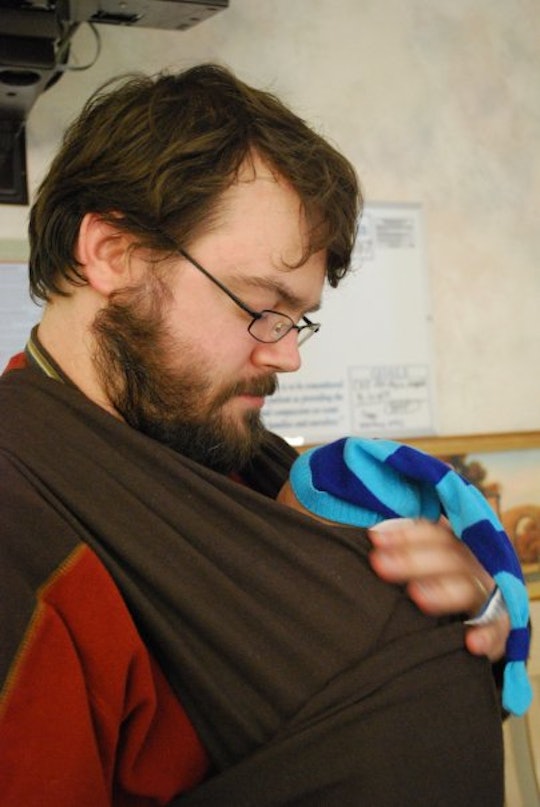 Honestly, I Wouldn't Have Made It Through Newborn Stage Without My Husband

Blaise was born after three days of hard labor, and he spent his first night crying. I was exhausted, having only slept in snatches for three days, and my husband became the hero of that first night. We tried breastfeeding, but Blaise still wailed. My husband swaddled Blaise because I never got the hang of it, and always had to ask him to do it for me. When that didn’t work, he rocked the baby back and forth, back and forth. He got Blaise to take a pacifier. Finally, through no intervention of our own, Blaise stopped crying and drifted off. I dozed through the whole thing, waking only to breastfeed. My husband knew I needed the sleep. He was so important then, and so important later, when I didn't know I'd need sleep and help. He'd be a rock for Blaise and me. My husband was the reason I made it through the newborn stage. I couldn't have done it without him.

More Like This
Here's The Deal With Babies Who Sleep With Their Eyes Half Open
30 Vintage Photos Of Parents Giving Their Babies A Bottle
18 Best Sand Toys In 2021 For Babies, Toddlers, & Kids
You Will Not Regret This Perfect Baby Pool From Target

In the morning, he went out and got us breakfast. He knew I wanted to leave as soon as possible, so we practiced the Moby wrap we planned to use constantly until we perfected it. It looked like six yards of fabric and not much else. But my husband, an Eagle Scout, wasn’t deterred. He read the directions, wrapped that fabric around himself like a Jedi, and inserted the baby — perfectly. Then he taught me how to wrap. I eventually became a baby-wearing educator, but my husband was the one who taught me first.

This became a theme in our relationship. My husband swaddled the baby, and when we needed it, he ran out to the store and got the tummy medicine the nurse recommended. I was a mess. My stitches hurt, and I was terrified to be left alone with the baby, because I didn't know what to do with him. I laid in bed and moaned, which was probably where I needed to be, given my nearly-fourth degree tear. He wrapped the baby up and cooked us meals, including Christmas dinner. I was able to relax and heal while he took care of me, the baby, and everything else.

I realized it was extraordinary to ask him to stay awake too, but I didn’t care. I needed someone to go through this with me. I was lucky to have him to keep me awake and aware. Mostly, I just needed him.

My husband's help even extended to sleeping. We were sleeping with Blaise in the co-sleeper, on my side of the bed, because I thought bed-sharing would kill him (I later changed my mind). When Blaise cried, despite his being on my side, I asked my husband to pick him up for me because my stitches hurt. Once he’d handed me the baby, I begged him to stay awake while I breastfed, and to wake me up if I fell asleep. Many nights we both fell asleep, me on my side with the baby breastfeeding peacefully, my husband sleeping on his side, facing us. I realized it was extraordinary to ask him to stay awake too, but I didn’t care. I needed someone to go through this with me. I was lucky to have him to keep me awake and aware. Mostly, I just needed him.

We used cloth diapers, and had enough, with a constantly-pooping newborn, for one day. So my husband learned how to fasten a prefold cloth diaper with a Snappi and cover. And every night, he put the diapers in the wash for the next day, or helped me do it. That involved turning on a rinse cycle, another rinse cycle, and then a sanitary cycle. Nearly two hours later, the diapers had to go in the dryer — an event that occurred either late at night or early in the morning. When it came to leaning over and moving the diapers from the washer to the dryer, my husband was there. It hurt my stitches, and I couldn’t do it with the baby wrapped. So he took care of it instead.

I couldn’t have stayed up that way. And I didn’t have the arm strength to hold Blaise like that. But my husband did.

We kept Blaise upright in the Moby wrap most of the time. He had severe silent reflux: milk came up far enough to hurt his esophagus, but not far enough for him to spit up. Until we got him adequately medicated at 3 months old, the constant pain made him a terrible sleeper. Yet again, my husband was there. I don’t function well without sleep, and he can run on three hours if he has to. So every single night, I breastfed Blaise, and then my husband took him on his arm, head near his elbow, bum in his hand, legs and arms dangling like a little panther. He sat down on an exercise ball in front of the computer. And he bounced. He bounced, and bounced, and bounced — literally for hours. I couldn’t have stayed up that way. And I didn’t have the arm strength to hold Blaise like that. But my husband did.

When Blaise was falling off the weight charts because he wasn't gaining weight fast enough, it was my husband who suggested bed-sharing. “He’ll breastfeed more if he’s next to you all night,” he said. So we took Blaise out of the co-sleeper and put him in bed with us. My husband wasn’t freaked out by having a baby in the bed. Instead, he gladly dropped the bed down, which meant dismantling it totally to take it off the frame. He didn’t complain when we had to reduce the number of pillows, or when we had to start using separate blankets, one for me and Blaise, and one for him.

I couldn’t have done the newborn period without him. He helped me with everything, from cooking to sleeping to breastfeeding to keeping Blaise happy. He could swaddle him better than me, and diaper him just as well as I could. His help kept me sane and happy. It kept my stitches from hurting. But more than anything, it showed how much he loved us. My husband's ministrations were born not just of necessity, but of love. And I’m forever grateful for it.