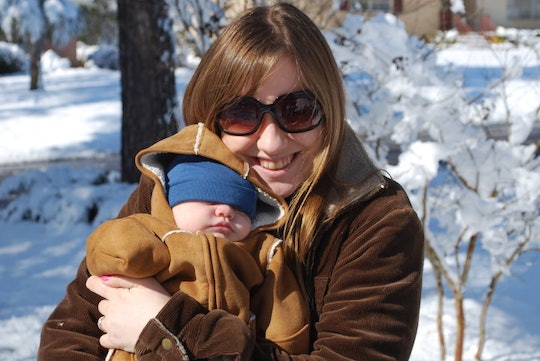 After three days, one change of venue, and three hours of pushing, my son Blaise was born at 7 lbs., 12 oz. He was puffy from the fluids I’d received in labor, but latched immediately and breastfeed for over an hour while the doctor stitched up my epic star-shaped tear. He kept breastfeeding well all through the night, though he screamed and screamed for hours at a time. The nurses just side-eyed us. Though Blaise was born plump as ever, this would be the last time Blaise had rolls. He didn't gain weight fast enough for a breastfed baby and that scared us. No matter how often he breastfed, day and night — and I put him to the breast constantly — he still didn't gain enough.

At his pediatrician visit the day after we left the hospital, Blaise had actually gained an ounce or two. When she asked how many times a day he was breastfeeding, I didn’t know. “On demand?” I said hesitantly. “Like, more than 10 times?” He had the proper diaper output, both wet and dirty, and showed no signs of dehydration or hunger. He was a properly eating, properly gaining baby who showed no signs of the trouble he'd have later on. So our doctor let us go with a clean bill of health and a hearty congratulations. She told us to come back in two weeks. And in that time frame, that's when everything would fall apart.

I immediately felt at fault, like maybe I wasn't feeding him enough, or maybe I was doing something else wrong.

We thought it was normal for babies to cry for hours and hours every night. My husband had to hold Blaise, his little legs dangling like a leopard on a branch, while he bounced on yoga ball and surfed the internet. Only this kept the tears at bay, with occasional breaks to breastfeed. Blaise continued to have regular wet and dirty diapers, but they were forest green, lime green, stretchy and slime-y instead of what people described as normal breastfed baby poop should look like. But both sets of grandparents said babies pooped a rainbow of colors, so we didn’t worry too much about it. We went into his two-week appointment blissful that all would be fine. But all was not fine.

“He’s gained weight,” the doctor said, “but not enough. He’s lost percentage points. I want to see him back in a week for a weight check.” He had been in the 50th percentile, the last time in his life he'd be that big. He was falling fast, to the 20th. No one knew why he wasn't gaining weight; his diaper output was normal, and he breastfed enough. I immediately felt at fault, like maybe I wasn't feeding him enough, or maybe I was doing something else wrong.

Clearly, he was in pain. And I didn't know what or how to help him.

Just after that, Blaise developed a troubling behavior: he would suck, suck, suck, then turn away and scream. I figured out that switching breasts would distract him, so I was trapped on the couch with both boobs out and that suck, suck, suck, scream rhythm. I began to count the sucks between the screams. Ten was a miracle. Three was bad. Usually, he hit somewhere in the middle. Clearly, he was in pain. And I didn't know what or how to help him.

“I should just give up and stop nursing him,” I cried to my husband. “My milk is hurting him. I’m a failure.” He countered by reminding me that I wasn't a failure, adding that I should try again. I was so grateful for his patience and his faith in me. At the one-week weight check, Blaise still hadn’t gained enough. He’d gained, but not enough for the charts. I showed the doctor how he was nursing.

“He has reflux,” she said. She prescribed Zantac, which is basically a heartburn medication. “You can try pumping and thickening his milk if you want. I want to see him back in another week.” “Should I try co-sleeping?” I asked desperately. “Then he could nurse through the night.”

I still worried. Was he tall enough? Did he weigh enough? Was he getting enough to eat? I could hardly sleep, and it wasn’t from the baby cuddled in my arm.

“That might be a good idea,” the doctor said gravely. No way was I going to pump and thicken his milk with rice cereal; I wanted my baby to get breast milk, and I wanted to make sure he was going to get it directly from the source. I suspected rightly that I wouldn’t have the fortitude to keep up the grueling schedule of pump, feed, pump, feed, every two hours, so Blaise stopped sleeping in his swing and started sleeping with me full-time. I hoped this was the solution.

In bed together, Blaise definitely breastfed more. And because he was asleep, he didn’t pause to scream mid-suck. He breastfed peacefully. But I still worried. Was he tall enough? Did he weigh enough? Was he getting enough to eat? I could hardly sleep, and it wasn’t from the baby cuddled in my arm. The new reflux medication wasn’t working, and we told the doctor so. Blaise still screamed when he nursed awake. I had to hold him upright after each feed.

Through some sleuthing and Dr. Google, we discovered that Blaise likely had a disorder: a milk/soy protein intolerance. That explained the green poop. He had all the other symptoms, too: cradle cap, reflux, mucus, and possibly blood in his stool. He was getting milk and soy proteins through my breast milk, and I reasoned that it was interfering with his nutrient absorption. Though we didn't confirm that with our doctor, I went on an elimination diet and stopped eating all dairy and soy products immediately anyway — even foods with traces of them in it. He seemed to improve almost overnight.

The new reflux medication worked, as did my diet, and I felt like a weight had been lifted from my shoulders: no one was going to make me give my baby formula against my will.

At the next appointment, we got good news. “He’s held steady in the 5 percentile," she said. “Good job, mama. Co-sleeping must be really helping. Keep it up.” She gave us a script for a new reflux medication. “This should help him,” she said.

The new reflux medication worked, as did my diet, and I felt like a weight had been lifted from my shoulders: no one was going to make me give my baby formula against my will. Blaise continued to co-sleep. And at the next weight check, he had again held steady on his percentile.

“He’s just destined to be small, now that we’ve treated his reflux,” our doctor told us. “I think he’s fine. I’ll see you in a month.”

A month! It meant that we’d succeeded: Blaise had gained enough weight. I felt lucky. Another doctor may have designated him as failure to thrive, or when kids don't meet their standards of growth. Instead, our doctor monitored his weight, and made sure he wasn’t actually losing any. His reflux didn’t help. But co-sleeping and medication did, and Blaise continued to gain. He’s still in the fifth percentile at age 6, but both his dad and I were very small kids. But Blaise is growing. Slowly but surely, he’s still growing. And the panic of the past has left us.

More Like This
Experts Explain Whether It’s Safe For Your Baby To Sleep On Your Chest
The Difference Between The PICU & The NICU
Can You Mix Breast Milk & Formula? Experts Weigh In
Here’s Your Guide To Paced Bottle Feeding