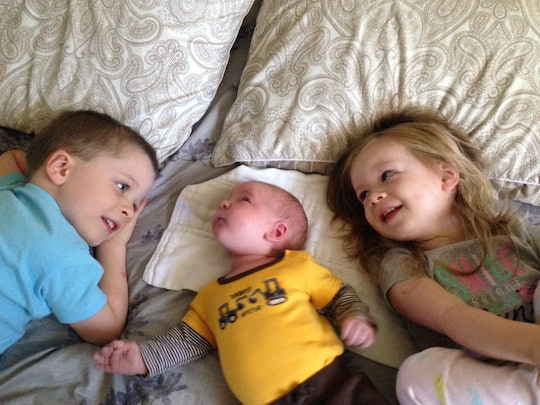 Ever since my third son’s first birthday, I’ve been waiting for the longing to hit. My husband and I decided we were done having kids a few months after our last child was born, but even after we made the final call, I wondered if I wasn’t jumping the gun a bit. I knew that capping our family with the three beautiful children we have was a good and logical choice. But when it comes to having kids, what is good and logical doesn’t always reign supreme.

I expected I would start backtracking as soon as I saw my friends getting pregnant and bringing home their new babies. I thought I would eat my words the moment I caught a whiff of that perfect newborn scent. However, as these events come and go I find myself more sure of my decision than ever. My friends’ babies give me waves of nostalgia, a longing for the times I have already experienced, but honestly, I don’t want more kids.

Last weekend, my husband showed a moment of weakness, wavering after one of those blissful days where all of the kids got along and the weather was just right and they all fell asleep without a fight. It was the kind of day that made him glad we had three kids. The kind of day that maybe made him want more. With our previous children, one day like this was all it took for the baby fever to swallow me whole. I paused for a moment, tried to imagine our life with four kids, but I simply couldn’t conjure the picture. I felt whole and happy. I looked at our three kids, and I knew that this was it. This was enough for me.

There was a third child in my heart long before there was one in my arms.

That wasn’t something I could have said before my last child was born. I struggled through two miscarriages and an anxiety-riddled pregnancy to bring our third child into our family. I wanted him, needed him, in a way that consumed me. There was a hole eating at my heart from the moment after my daughter’s first birthday. It wasn’t simply the fact that my second child was starting to waltz away from her infancy that made me want another baby. There was something missing. Someone missing. It was a force so strong it couldn’t be mistaken.

I had felt it swelling inside of me for a long time. I'd leave the house with both my children and turn around with the panicked feeling that I was leaving someone behind. I'd have them both by my side and wonder where the baby was, when there was no baby. I'd watch my first two play together and imagine the weight of another in my arms. I'd envision my children growing older and playing, and I'd picture another child alongside them. There was a third child in my heart long before there was one in my arms.

I don't look at my three children and imagine another in my arms. I don't see a future with four children. I don't feel incomplete. And I feel totally at peace with that.

When my last child was born, I spent a few months toying with the idea of a fourth child. I relished the newborn period. I swooned over the idea of my children coddling another babe with such bold sibling pride. I lamented the fact that I may never get to experience a fully "natural" labor after getting a last-minute epidural. I rode the full rollercoaster of emotions that comes with the “will I or won’t I” game. Then finally I landed on the answer: I was done.

I expected that I would waver, perhaps go back and forth a couple more times before I was really, truly certain, but that has not been the case. At least, not yet. I've held new babies. I've touched pregnant bellies (with permission, of course). I've celebrated impending births. And all the while, I've grown more confident that I have made the right choice.

Though there are moments when I feel a pang of longing, it's for the times that have already passed with my own children. It's a longing of nostalgia, not an emptiness waiting to be filled by another child. I don't look at my three children and imagine another in my arms. I don't see a future with four children. I don't feel incomplete. And I feel totally at peace with that. Although it feels strange to say it with such certainty, especially after knowing the joy and fulfillment that we've all experienced through an unexpected pregnancy, I know that I'm done. I know I don't want more kids. I'm ready to move forward into the next chapter of my life, because I already have everyone I want by my side.