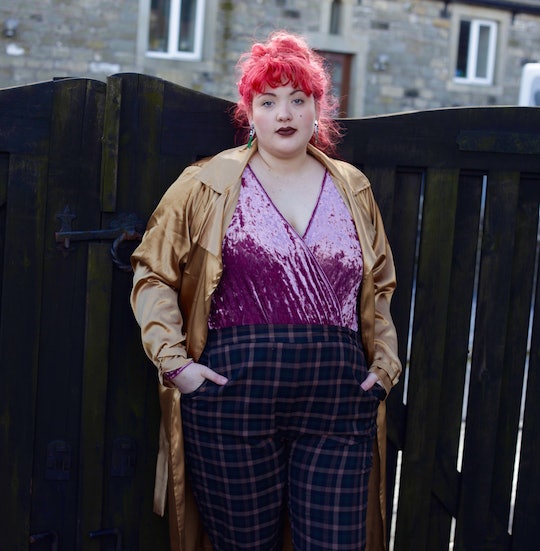 I Lost My Sense Of Style After I Had A Baby

In the months before my daughter's arrival, I spent a lot of time worrying about what motherhood would be like. I imagined myself perpetually covered in poop and spit-up. I tried to mentally prepare for the idea of a life sans sleep. There was never any doubt in my mind that things were about to get really hard. What I didn't anticipate, however, is that one of the most difficult aspects of new motherhood would be the loss of my personal style.

I made the decision to breastfeed early on. I don't really buy into the idea that breastfed babies have higher IQs, but if there was even a slight chance that my milk could provide immunities that might keep my baby healthier in any way, then I was going to try. (Of course, getting said baby to latch on would also prove tremendously trying).

What I never stopped to consider about breastfeeding, however, was how difficult it would be to nurse while still remaining fashionable. For the sake of practicality, the easiest clothing items to wear when you have to take your boobs out every few hours are button-downs, and maybe some looser-fitted wrap dresses and tops. But for me — a fat woman who has only recently been given access to clothing options that allow for self-expression and empowerment given the very new improvements in the plus size fashion industry — my wardrobe is about a whole lot more than button-downs. So new motherhood has limited my personal style in a way that I couldn't have anticipated.

After my daughter's birth, breastfeeding definitely proved itself to be one of the largest barriers between new motherhood and my style. But there was a lot more to it than just that. A month into being new mom, I was probably running on a grand total of 10 total hours of sleep in weeks. Changing out of pajamas seemed futile. Any clothing I put on my body would only get covered in infant vomit or bright yellow stool, after all. Plus, the time needed to craft an actual outfit would be time spent away from the baby. Or time spent away from trying (even if failing) to rest.

Fashion is meant to be utilized as a tool with which to conceal our back boobs or visible belly outlines. It's something that should help us appear smaller while we strive towards actually becoming smaller.

If I wasn't someone particularly interested or invested in fashion, these issues might not have felt so soul-crushing. If I wasn't a plus size woman who, before motherhood, was learning to explore style in ways that I didn't feel were possible until fairly recently, they would've been even less pressing. But plus size fashion has changed quite a bit in the past few years, in ways that have felt incredibly liberating to me.

While there is still a long way to go before plus-size fashion is as varied in price points, style aesthetics, and size ranges as its straight size counterpart, it's also arguably more progressive and diverse, as an industry, than it's ever been. Where before, one could only find bedazzled tunic tops, poorly-fitting boot cut jeans, and waist-belted dresses in sizes greater than a 16/18, you can now find bodycon dresses, crop tops, mesh paneling, bright colors, leopard prints, eye-catching sequins, and booty shorts.

That said, fat shaming and sociocultural fatantagonism — the ingrained belief that fat people are inherently bad — are not things of the past. We are still largely taught that fatness is equal parts deplorable and hideous, while fat people continue to be denied plenty of basic human rights. We are told to shrink. We are told to hide. And we are told how to dress while doing so. Fashion is meant to be utilized as a tool with which to conceal our back boobs or visible belly outlines. It's something that should help us appear smaller while we strive towards actually becoming smaller.

When I put on loud hues and slinky cuts and fishnet tights, I feel radical in my decision not to be shrunken, not to be invisible. I feel as though I'm refusing to apologize for my existence as a fat person. I feel stronger, braver, and more myself.

Most of my sartorial choices are meant to serve as direct opposition to these ideas. When I put on loud hues and slinky cuts and fishnet tights, I feel radical in my decision not to be shrunken, not to be invisible. I feel as though I'm refusing to apologize for my existence as a fat person. I feel stronger, braver, and more myself.

The majority of these styles, however, aren't particularly compatible with breastfeeding. They are not easy outfits equipped with snaps and buttons that would allow my baby to get her much-needed titty time in a timely fashion. Because they are not especially easy, they also require energy and commitment to the look to put together: The kind of energy and commitment I don't often have these days.

Sometimes, I pick out an outfit with the goal of directly confronting people with their prejudices by forcing them to ask themselves if my ensemble would piss them off just as much if worn by a thin person. But most of the time, I dress the way I do just to make myself happy. The way that clothes make me feel — certain in my right to stand up for myself and live freely — isn't something I would ever want to sacrifice.

In the first couple of months of parenthood, however, it was starting to feel like I would have to. Instead of sequin jumpsuits, faux fur coats, bodycon dresses, or high neck T-shirts, I was relying on the few button-downs in my wardrobe: Baggy and shapeless and not really me at all. But unless I was willing to take off my whole dress or shirt wherever I may be, regardless of the weather or the company, these were my new go-to items.

The way that clothes make me feel — certain in my right to stand up for myself and live freely — isn't something I would ever want to sacrifice.

The more my baby needed from me, the less time I seemed to be able to dedicate towards getting dressed. I told myself it didn't matter — that fashion was unimportant in comparison to dedicating every waking moment to this tiny person who needed so much. As I soon learned, however, this was a lie. Limited to button-downs, no matter how cute some of them may have been, I began to feel like a pre-2012 version of myself: Someone who wanted to experience the joys of fashion, but who painfully few brands were making clothes for at the time. And as a result, someone who didn't quite know how to be herself.

I have since found a few ways around this style crisis. Tank tops and spaghetti straps are easy enough to slip off my shoulders when I need to pull out a boob or two. I have started sizing up in the aforementioned wrap silhouettes, so I can strip down without struggling as well. As for dresses (which I generally adore), button-downs unfortunately remain the primary option. There are, of course, clothing styles out there specifically designed for nursing mothers. These are looks made with an extra boob layer that can flap up when needed, or ones equipped with breastfeeding-friendly wrap silhouettes. They don't tend to come in my size, though. Even if they did, they wouldn't necessarily be my style.

I still cannot really wear the bulk of my wardrobe if I want the ease of feeding my baby. My high-necked tops, printed T-shirts, or skintight blouses might allow for it more as the weather warms, but I'll still have to pull them up over my boobs. Dresses of similar cuts won't really work, either. And when it comes to anything that zips at the back, I really don't want the hassle of getting it down while also trying to cater to a screaming infant.

While I realize that some folks may trivialize this all — deeming it a non-issue on the grand spectrum of parenting issues, fashion is the opposite of trivial to me. I know plenty of fellow fat people (or otherwise marginalized women and femmes) whom the same is true for. The same is true for many pregnant women and new mothers, too.

Maternity and breastfeeding-specific fashion exists, sure. Yet these clothes are defined by their terrible cuts, fit, and patterns, serving only to further hide and de-sexualize the women they are made for. The reasoning seems to be that women with kids needn't be preoccupied with looking or feeling nice any longer. So when something like clothing is used as a tool for othering an entire group of people, reclaiming that thing — making it entirely your own — is nothing short of empowering.

Losing my pre-baby style has been hard. Sure, I love my baby, but that doesn't mean that I don't miss the excitement of getting dolled up in the mornings in garments that feel political and necessary.

Often, when I get dressed in things that didn't exist for fat people only a few years before, I am led to a place of quiet contemplation. I think about the positive steps we've taken and I think of the many steps left to take. I remember my former self, riddled in body image insecurities and self-hate, and I feel so happy that she is not in that head-space anymore. I feel so thankful to the activists and the designers and the artists and the writers who helped her leave it. But I also feel thankful to the clothes themselves: The little pieces of resistance I get to put on my body.

Losing my pre-baby style has been hard. Sure, I love my baby, but that doesn't mean that I don't miss the excitement of getting dolled up in the mornings in garments that feel political and necessary. Even if I'm the only one who's going to see them. What I'm trying to remember is that it's not goodbye forever. When I finally reunite with the outfits that make me feel most powerful, I will treat them like the friends I haven't seen in ages. And I know I will feel amazing.