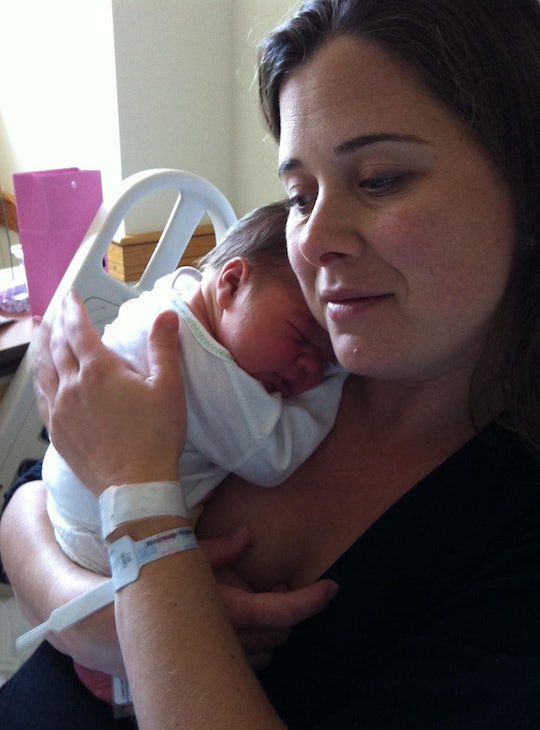 When my third baby was born, I was under the impression that I’d be hurting for sleep for a few months, but that all I had to do was put my head down and get through it. After all, I had already raised two babies — I knew what I was doing. The worst part, from my perspective, would be getting used to breastfeeding again. I had always wanted to be one of those moms — like so many of my friends — for whom nursing came easily. Instead, for me, breastfeeding had always been a chore. I had dealt with cracked, sore nipples and one mastitis infection that left me bedridden for a week. With my third child, I thought that if I could just get through the first four weeks until we hit our stride, I’d be golden. My older two children had breastfed until 10 and 6 months, respectively — each for a healthy amount of time.

What I didn’t realize was how my thyroid disease, which had crept up on me unexpectedly around the time I turned 25, would get subsequently worse with each of my pregnancies, and eventually make it nearly impossible for me to breastfeed my third baby.

My endocrinologist had warned me of this in the weeks before I delivered my baby. “You know,” she said, “your milk supply is going to go down after the first two weeks and you’re going to have to supplement.”

I nodded my head, ignoring her warnings, believing instead that my status as a veteran mother would ward off any bad breastfeeding juju. I firmly believed that this time, for my last child, I would finally get the breastfeeding part just right.

There is a sense of bravado that comes with being a mother. It carries us through the changes we experience in pregnancy, the way we go through our labors, the way we handle the first few months of motherhood, and it makes us feel like we can handle just about anything. Perhaps it’s our protection against an actual lack of control over everything. If we pretend we know exactly what we’re doing, maybe we hope we will actually arrive at a place where that’s actually true. The problem with this false confidence at a time when nothing is actually under control is that it sets mothers up for a constant sense of failure.

When my third child was born, he took to my breast right away, eager and ravenous. As expected, breastfeeding for me wasn’t breezy or pain free. I practiced my latch without nipple guards as long as I could, but eventually, I couldn’t breastfeed without searing pain unless I used them. Years earlier, a nurse practitioner had told me not to worry about using the guards. If they made it easier for me to breastfeed, I should keep using them. Eventually, she advised, I could take them off for one nursing a day, and wean myself off them slowly from there.

That strategy — do what you need to do and adjust it all later — had worked with my first two children, but with my third, something was up. Two weeks after he was born, as my endocrinologist had predicted, my breasts seemed to deflate from cantaloupe-size to lemons overnight.

“It’s all in your head — your milk supply is fine!” my friends encouraged me.

I wanted to believe them. By week four, my son had trouble staying on the breast for more than a few minutes at a time. He’d stop and scream, pulling away, unsatisfied. By week five, I was ready to give up.

I couldn’t envision putting any more effort into breastfeeding than I already was, plus I knew that my thyroid was a large part of the problem. I was heartbroken — I’d hoped I’d finally get it right.

For a time, my pediatrician eased my worries. If my baby could get at least a teaspoon of breast milk a day, she said, he would be receiving all the antibodies he needed. It was better than nothing. Even so, my son was not happy actually breastfeeding on the breast, which wasn’t producing enough milk to keep him satisfied. Once the letdown reflex had subsided and the milk flow softened, he would refuse to drink any more. When I tried to pump, I didn’t have any milk left.

I wept at the dinner table, having failed myself and my son. I cried on the way to preschool where I brought my older son three mornings a week. I sobbed in the middle of the night. “I hate this. I hate this. I hate this,” I would whisper to myself. Then I would lean down and kiss my baby’s forehead, tickling his feet to try and wake him. I wanted him to keep breastfeeding, but he only wanted to sleep my arms. He would wake every 45 minutes, remembering that he was hungry, and then fall asleep again. I was so revved up on adrenaline than I couldn’t even fall asleep between failed feedings.

“All I can say is that if you’re happy, your children are going to be happy,” my sister-in-law told me over the phone. And after that conversation, I finally gave up breastfeeding.

At 6 o’clock one morning, when my husband got up to shower before work, I realized that I hadn’t slept since midnight. I heaved and moaned, drained of all reserves, even my tears. Within minutes, my older two children would be coming in, expecting me to start another day. Something had to give. At first, I only switched to bottle-feeding formula at night — this way, I could avoid the difficulty of breastfeeding when I was at my most vulnerable and exhausted. Once I got comfortable with that, I tried sticking to breastfeeding once a day, when my older children were at school and I had time with my baby. But even then, with my son unhappy about feeding, and so was I. Each time I fed him, I remembered that the whole thing hadn’t gone according to plan.

“All I can say is that if you’re happy, your children are going to be happy,” my sister-in-law told me over the phone. And after that conversation, I finally gave up breastfeeding, switching to formula for all feedings. My son was only 8 weeks old. Two weeks later, he finally settled down at night, satisfied, and he began sleeping 13 hours at a time.

With the stress of breastfeeding gone, I started awakening before any of my children, giddy that I’d finally slept for the first time in months. I had more time to take care of myself, more time to snuggle with and love my children rather than feeling upset, exhausted, and dissatisfied with my failed plan. It wasn’t the way I had envisioned it, but in the end, the switch to formula saved my sanity and made me a better mom.