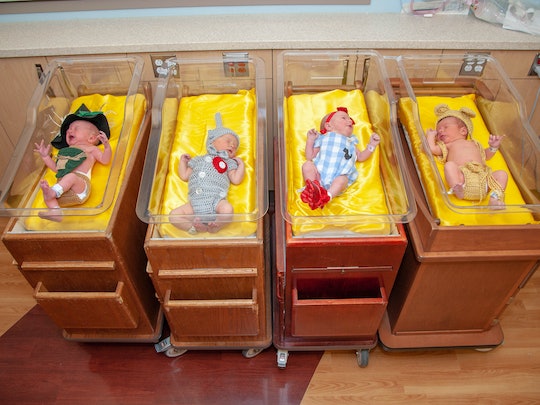 Lions and tigers and bears... and babies! While Halloween is still a good two months away, that's not stopping one local hospital from outfitting their smallest (and newest) patients in one-of-a-kind and totally adorable duds. Marking the cutest viral news this week, a Pennsylvania hospital dressed up newborn babies in Wizard of Oz costumes to celebrate the 80th anniversary of the iconic and beloved film. And, oh boy, these little munchkins are cute!

Ahead of the movie's anniversary — which hit the silver screen on Aug. 25, 1934 — nurses at West Penn Hospital in Pittsburgh, Pennsylvania dressed up a group of newborn babies as Dorothy, Tin Man, Scarecrow and, of course, the Cowardly Lion, according to Fox News. The Wizard of Oz has held a special place in fans' hearts and pop culture ever since it premiered decades ago, so it's no wonder people are over the rainbow about the cute photos the hospital recently shared.

On Aug. 22, West Penn Hospital posted a series of now-viral photos on its Facebook page, with the caption: "Our munchkins celebrated the 80th Anniversary of the Wizard of Oz. The movie may turn 80 on Sunday, but it remains a classic, and for our newborns and their families, there's no place like home! Tell us, which Wizard of Oz character is your favorite?"

Unsurprisingly, the post quickly went viral and garnered lots of comments from users who just couldn't get enough of the pint-sized Wizard of Oz crew. "My favorite characters just got cuter! So clever! Props to you!" one Facebook user commented on the photos.

Some people couldn't decide which baby or character was the cutest, as one person commented: "They’re all my favorite. On this one, you just can’t separate the team!!!"

But others had a definitive favorites: "I'm gonna have to go with all the little lions," one person chimed in, while another said, "The tin man [is my favorite]. A lot of work went into making that costume." And they're right — someone went through an awful lot of trouble to crochet (or knit) these tiny little outfits complete with intricate details.

Just look at these cuties!

Stephanie Waite, a spokesperson for the hospital, told Inside Edition that they dress up their tiny patients every once in a while, but it's "usually in connection with a holiday." Waite added, "Everybody loves seeing the adorable babies. It’s just something we do that puts a smile on people’s faces."

Dressing up newborns in more than just the typical blue and pink onesies seems to be a growing trend in hospitals across the country. Just last month, in fact, nurses at Cincinnati's Christ Hospital Health Network donned their newborns in "Baby Shark" themed onesies in honor of Shark Week, which received the same viral attention as these Wizard of Oz cuties.

If you're interested in dressing up your own munchkin in Wizard of Oz garb, be sure to check out Etsy where you can find some pretty sweet outfits that fit newborns to toddlers.

The newborns at West Penn Hospital are the talk of the nursery right now and hopefully they'll appreciate the viral notoriety somewhere down the (yellow brick) road. And even if they don't, these cute costumes made the perfect photo op for new parents and are sure to hold a special place in the family scrapbook for years to come.