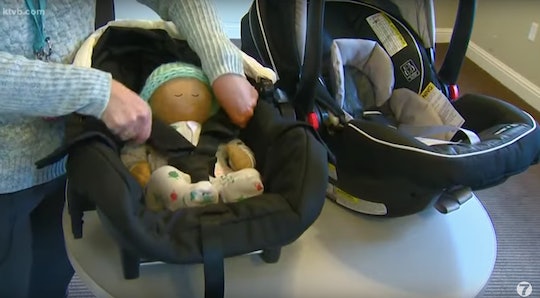 This Hospital Is Warning Of "Knock Off" Car Seats, So Here's What Parents Need To Know

Driving your newborn baby home from the hospital for the first time can be intensely stressful. They're still so new to you, so unbearably precious, and cars go so fast — it's frightening. And, of course, every new parent wants to make sure their little one is safe and sound in their car seat. Unfortunately, there might be a cause for concern here. As the Associated Press recently reported, an Idaho hospital is warning parents of "knock off" car seats after encountering two counterfeits during its own safety inspections.

St. Luke’s Children’s Hospital in Boise, Idaho ran into an issue in recent weeks, according to the Seattle Times, and hospital officials want to make sure parents are made aware of possible hazards when purchasing a car seat. According to a report by KTVB-TV, the hospital's Pediatric Education and Prevention Programs car seat technician Brittany Joplin, who is there specifically to offer parents guidance and support with car seat safety, discovered not just one but two "knock off" car seats during a routine discharge check.

The car seats initially appeared to be name brand car seats that would meet safety criteria, but upon closer inspection they were discovered to be cheap imitations, as KTVB-TV reported. As such, they were made with cheaper materials that did not meet safety standards.

Indeed, Joplin said, according to the Associated Press, that these counterfeit off-market seats were not up to the task of keeping a baby safe. "It’s pretty terrifying. There’s no way a child would survive a crash in a seat like this," she told KTVB-TV.

So here's the problem: These two "knock off" car seats were reportedly purchased online, according to NBC News affiliate KHQQ6, which obviously makes it much more difficult to check the quality of materials or double-check to make sure the car seat you're paying for does indeed come from the manufacturer.

The two car seats in question were made from flimsy plastic, as Joplin explained in KTVB-TV's report, and did not include certain safety features that are standard on American car seats.

"All of the seat parts are made of plastic. You can see here the harness doesn't even fit our training baby here properly — the straps come out from way above its shoulders," Joplin explained to KTVB. "There's no chest clip, which is an item on all car seats in the United States."

Adding to what Joplin advised, the National Highway Traffic Safety Association also has specific requirements for car seats that parents should follow. For instance, parents should select a car seat based on your child's age and size, keep your child rear-facing as long as possible, and be sure to read the manual.

For parents who want to ensure their child's car seat is actually going to keep them safe, Joplin offered a few additional tips to be able to spot the counterfeit seats from the real ones. For instance, she noted to KTVB that a real car seat will come out of the box with an owner's manual and a registration card attached to the harness, and it will also have warning stickers and labels on the seat, indicating where the seat was manufactured.

Additionally, according to Safe Kids Worldwide, there's a right and wrong way to buy a car seat. For starters, you should always read the label, whether you are buying online or in store, to ensure the specifications meet your child's height and age requirement. Also, as Safe Kids Worldwide advises, you shouldn't buy a used car seat because you have no way of knowing the history of the car seat (whether or not it was involved in an accident, for instance). It's also smart to check for safety recalls often, and with that in mind register your child's seat to make notification easier, as the organization recommends.

As for using hand-me-down car seats, the American Academy of Pediatrics advises against it.

And if you are concerned about the safety of your child's car seat and if it's installed properly, the best thing you can do is take it to a car seat technician in your area for a thorough check. Because there's nothing more important than your child's safety.

More Like This
Over 10,000 Sippy Cups & Bottles For Toddlers Recalled Due To Lead Poisoning Hazard
Patrick Mahomes & Brittany Matthews Welcome Baby #2
14 Baby Names Inspired By 'The White Lotus' That Deserve A Round Of Aperol Spritzes
20 Heartwarming Episodes To Help Prepare Your Child For A New Sibling