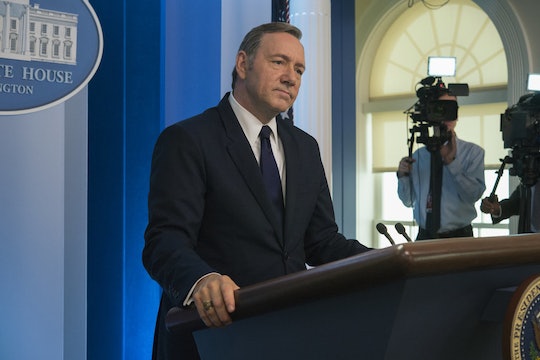 'House Of Cards' Instagram Gives Us A Glimpse Into Season 4, & We Have Quesitons

Is it crazy to say that the House of Cards promo was the best part of the GOP debates on Tuesday? No. During the fifth GOP debate on CNN, the show released a “campaign commercial” for Frank Underwood, Kevin Spacey’s character on the Netflix original. And the network has gone all out to get viewers revved up for the next season. Even the House of Cards Instagram is offering clues about what to expect in the upcoming season, which will premiere in April.

Based on the social media account and the show's website, which looks like one made for a candidate, this season seems to center around Frank's election into office for a permanent role as the President of the United States. If you’ll remember, season three ended with Frank fighting to keep his role and (spoiler alert!) Claire walking out because she realized Frank made her "weak and small." This left many wondering if the First Lady would come back to the White House in the fourth season. And if you click on Claire’s page on the website, it looks like she might be long gone.

It seems we'll have to wait till April to find out the fate of the world's most deceitful (and fictitious) President and First Lady.