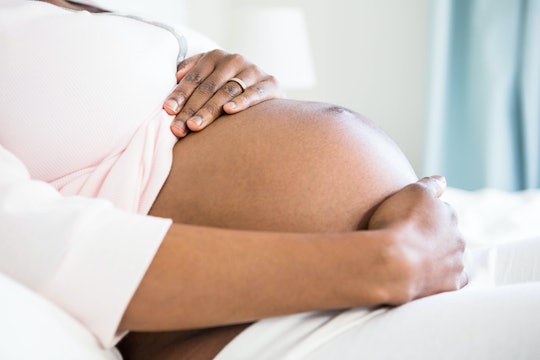 Lawmakers Are Finally Tackling The Rising Maternal Mortality Rate In The U.S.

Some days it feels like it's nothing but doom and gloom on the political horizon no matter what side you might be standing on. Then there are days when the sun comes out and you get a little glimmer of hope, some good news that's just enough to keep you going. This, my friends, is one of those cases. Because, as The Hill reported, the House passed a bill aimed at reversing the maternal mortality rate in the United States, and it's a seriously important step in the right direction.

On Tuesday, Dec. 11, the House of Representatives passed HR1318, or the Preventing Maternal Deaths Act, in a unanimous bipartisan vote of support, according to ProPublica. This bill will provide grants to states to set up committees to review maternal deaths and investigate ways to end them, as The Hill explained.

This bill comes after the surprising news that the United States has the highest maternal mortality rate in any developed country, according to a report by USA Today. The report found that 700 women die in childbirth every year, a rate that has risen steadily in recent years. When comparing maternal deaths to other countries of similar socio-economic footprints, 26.4 mothers die per every 100,000 live births while in Germany that number is 9, the United Kingdom is 8.8, France is 7.8, and Canada is 7.3, the report found.

Even more distressing is the news that half of these deaths would have been prevented if hospitals followed basic safety practices that were not done, like offering medication immediately when high blood pressure was indicated or checking postpartum blood loss by weighing pads, as USA Today reported.

Fortunately, this report and others, including a report by The Courier-Journal in September that found 30 states have not been looking into medical care or studying maternal deaths, helped to spur on some change.

Republican Rep. Jaime Herrera Beutler of Washington told The Courier-Journal that these reports had Congress considering the issue of maternal mortality rates "top of mind." Beutler told the publication, "Having this front and center gave moms the chance to see it, and we got to hear from those moms."

The passage of this bill has received significant support from voters on social media.

The Preventing Maternal Deaths Act was sponsored by Republican Rep. Beutler and Democratic Rep. Diane DeGette from Colorado. The two issued a joint statement about the bill, according to The Hill, saying:

By providing states with resources to investigate every maternal death, we can begin to tackle this troubling trend and take appropriate steps to prevent such tragedies in the future. We must improve our understanding of why mothers are dying in pregnancy, during childbirth and postpartum so we can then unleash every possible resource to protect women in this critical season of life.

The American College of Obstetricians and Gynecologists President Lisa Hollier also voiced approval for the new bill, telling The Hill that this is an important step to reversing the rising maternal death rate. "No more pregnant and postpartum women should die from preventable causes," she said.

While this is an important first step, the bill still needs to pass in the Senate to be fully ratified, as The American College of Obstetricians and Gynecologists noted in its statement. "Congress’ work is not yet done. We call on the U.S. Senate to swiftly pass this bipartisan legislation and send the bill to the president’s desk for enactment. America’s moms can’t wait," the statement concluded.

It seems incredible that women are still dying from preventable causes in childbirth in 2018. And with so much support, hopefully this bill spells better news for pregnant women in 2019 and years to follow.