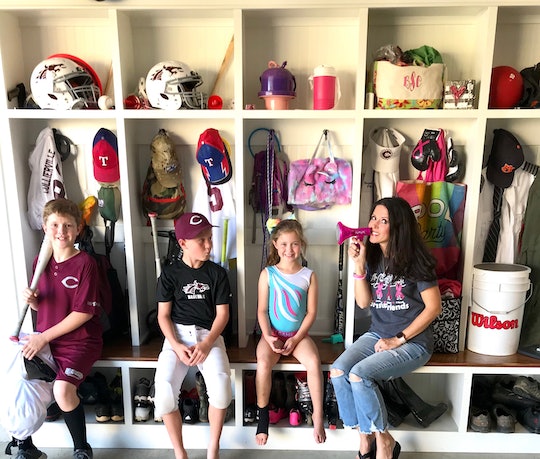 “The early stages of a cancer diagnosis is a difficult time,” Bridgett Spillers, a mom of three and two-time breast cancer survivor, tells Romper. “There are more questions than answers, and no matter how hard you try, it’s difficult not to think the worst.”

Four years ago, Spillers sat in the back of a C-130 military aircraft on her way to Arlington National Cemetery. Her husband Mitchell’s Air Force Squadron had lost six airmen in a devastating plane crash in Afghanistan, and Spillers was on her way to lay the men who served alongside her husband to rest. She held an ice pack to her breast through the flight, dealing with her own personal trauma amidst the loss in their military community. A breast biopsy the day before had left her tender and anxious about the lump she had found while scratching an itch. Her husband was stationed overseas as she navigated life with their three young children — then 3, 5, and 7 — in Texas far from extended family support.

A nurse practitioner with a background in urgent care and women’s health, she was cautious of the propensity for healthcare professionals to over-diagnose themselves. Yet, when she first felt the small lump near her armpit two weeks earlier, she was shocked and immediately concerned. Just two months prior, she had a breast exam by her OB-GYN. Furthermore, during her own mother’s battle with ovarian cancer, genetic testing had revealed that Spillers was negative for the BRCA, better known as the “breast cancer gene.” She had done everything right and taken all the precautionary steps, so how could she be feeling this pea-sized mass right now?

After a battery of tests, Spillers was diagnosed with HER2+ breast cancer. This particularly aggressive form of cancer is positive for human epidermal growth factor receptor 2, which can make the cancer less responsive to treatment. She told her husband over FaceTime, and the military flew him to her side by the next night. “It was a couple of weeks before I could get in with an oncologist. Those were the darkest days of my life,” she recalls. “I was scared. I thought about my three young children and my husband. Would I be there for them? What would happen to my career? Will I need a mastectomy? What about chemo? Radiation? Everything was unknown during that time.”

Spillers did undergo a full double mastectomy with complete axillary node dissection and reconstruction. She underwent chemotherapy, never missing an event for her children. “When my [white blood cell] counts were really low — during the winter — I just put a mask on and went at it,” she says.

At the advice of her oncologist, she did not do radiation after the chemotherapy. It was estimated that it would only drop her risk of recurrence by 3%, and no cancer cells had been detected by pathology. She breathed a cautious sigh of relief, and went back to the hectic, busy life of a military wife with three young children.

I wanted power! The power to be normal despite the fight raging inside my body.

Two years later, Spillers woke up one morning with an itch. Again. Right in the same area as her lump the first time. Right at the edge of her implant. She was shocked to feel yet another pea-sized lump. “I thought maybe it was scar tissue, or a remaining stitch,” she says.

Now in Memphis, her new oncologist struggled to even feel the lump when she shared her concern. Yet he ordered a biopsy, and after the results confirmed her cancer had returned, she was ordered to endure another round of chemotherapy — this time to be followed with a round of radiation.

Spiller’s hair had just grown back, and she struggled with the idea of losing it again. “Walking around bald is like carrying a big banner, ‘Pity me, I’m a cancer patient.’ I know people have good intentions, but pity was not what I wanted,” she says. “I wanted power! The power to be normal despite the fight raging inside my body.”

She decided during this second fight with cancer to try cold capping. By wearing a tightly fitting cap which chilled her head with dry ice to -40°F, reducing blood flow to the scalp during chemotherapy, Spillers was able to preserve her hair. The process was draining, especially when coupled with her chemo treatments, but she says she’s thankful she did it. Now she mentors other women going through breast cancer treatment and specifically through the cold-capping process, so that they can preserve a bit of that normalcy she craved, too.

Today, Spillers is done with treatment, and is told she has a low risk of recurrence, but remains cautious about declaring herself cancer-free. She will continue her vigilance, regular breast exams, and checkups, while striving to live her life.

Her first oncologist has changed his protocol due to Spiller’s experience He now includes a recommendation for radiation after chemotherapy with HER2+ breast cancer diagnoses — and has told Spillers he hopes an abundance of caution will lessen the chance of recurrence that Spillers experienced. If I had to go through this again just to save one person’s life, it was worth it,” she says.

After watching her own mother battle ovarian cancer, and dealing with her own diagnosis, Spillers teaches these women to advocate for their own health.

Spillers, whose faith is very important to her, feels she was given this cancer journey for a purpose. She sees the opportunity to mentor other women as part of the reason she survived. Spiller’s oncologist sends women her way who need encouragement. After watching her own mother battle ovarian cancer, and dealing with her own diagnosis, Spillers teaches these women to advocate for their own health. No matter how insignificant they might think their concerns are, they should push to be taken seriously, she says.

Above all else, though, Spillers wants to impart to these women how important attitude is during the grueling trial of breast cancer. She knows she could have sat in despair through her cancer, and understands why so many women feel inclined to do so, but encourages those she mentors to be intentional about focusing on positivity, instead.

Health, says Spillers, is about the mind as much as the body: “Keep your faith, have hope, and choose joy.”