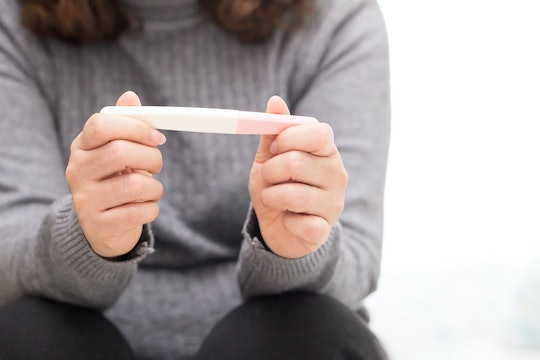 Just How Accurate Are Pregnancy Tests?

There are few things more nerve-wracking than taking a pregnancy test. Whether you're excited or terrified, everybody who pees on one of those sticks has their heart racing at an Indy 500 speed. But how accurate are pregnancy tests? Is it worth getting yourself all worked up, no matter the outcome, if there's a chance it could be wrong?

With so many pregnancy tests claiming to be able to give you a fool-proof answer days before you even miss your period, it's no wonder that a lot of people are concerned about the accuracy of taking one. But if you're following the directions of your test and using the product correctly, the results are pretty accurate. Research published in the journal Geburtshilfe und Frauenheilkunde found that the type of pregnancy test and its directions could affect accuracy. A pregnancy tests that consists of a strip being dipped in a collection of urine, for example, could be off depending on if the container was clean, if the urine was diluted, if the strip was held in the urine for the correct amount of time, and other factors. The research also found that the claims of many pregnancy tests, like detecting pregnancy a week before your missed period, are inconsistent and can often lead to inaccurate test results.

Licensed Acupuncturist specializing in women's health and fertility, Kristen Burris of Eagle Acupuncture, tells Romper that home pregnancy tests are incredibly reliable when used correctly and under certain circumstances. "For the most part, you can expect anywhere between a 97 to 99 percent reliability for a positive pregnancy test," Burris says. But she notes there are a lot of factors that could influence a false-positive test, including fertility drugs. False-negatives can be the result of other pharmaceuticals like epilepsy medication, sedatives, or tranquilizers like Valium or Xanax.

"We always recommend waiting as long as you can before taking a pregnancy test," Burris says. "Taking it the day after a missed period is less likely to show a positive result compared to waiting a full week after you expect your period to arrive. Ovulation days vary as well so this can affect when your menstruation arrives and can throw off testing days."

Burris suggests that your first pee in the morning usually has the most hCG detectable by home pregnancy tests. "If you forget to test first thing in the morning, wait until the next morning to test," she says. "Women who get false negatives (the test reads not pregnant, when in fact she is pregnant) usually can blame the amount of hCG in their urine, how much water they consumed, what time they took the test, and how recently they urinated before taking the test." Burris notes that if you suspect you are pregnant, you should test a week later to see if the results change and make an appointment with your midwife or OB-GYN for a blood test.

Patience is a virtue, especially when it comes to pregnancy tests. But if your period hasn't shown up and you think you might be pregnant, take a test. You're more likely to get an accurate result than not. (And you can also feel a little bit like a scientist.)