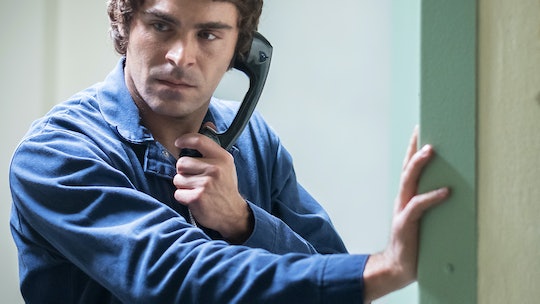 Zac Efron has come a long way since he broke the status quo in Disney's High School Musical. Now, Efron is starring in Extremely Wicked Shockingly Evil and Vile, a biopic that chronicles the crimes of Ted Bundy. With America's growing obsession with true crime, it's likely that you've heard of this horrifyingly real serial killer. So how accurate is Extremely Wicked Shockingly Evil and Vile? Although fans were furious over Efron's portrayal of Bundy when the trailer was first released, the film doesn't try to romanticize history.

Bundy had a laundry list of crimes. According to Biography.com, the serial killer and rapist admitted to 36 murders in the 1970s. But, it's believed that he killed about 100 or more. In 1989, Bundy was executed by the electric chair and he has since been the subject of numerous novels and films. Extremely Wicked Shockingly Evil and Vile presents a new angle to Bundy's story. Rather than focusing on Bundy's narrative, the Netflix film is told through the eyes of Liz Kloepfer (Lily Collins), his longtime girlfriend.

When the trailer dropped in Jan. 2019, both fans and critics criticized the film for trying to glamorize Bundy, citing Efron's good looks as part of the problem. However, in an interview with Newsweek, director Joe Berlinger, defended the historical accuracy of Extremely Wicked Shockingly Evil and Vile and explained that the film sheds a light on Bundy's ability to charm people to get what he wanted.

“You see how incredibly believable and charming [Bundy] can be,” Berlinger revealed. “I think that's important for people to understand. This is how he won people over. Bundy should have been caught long before he was, but he avoided detection because so many people around him believed in him."

Following the trailer's debut, Kathy Kleiner Rubin, a survivor of Bundy's crimes, spoke to TMZ about the film. Although she revealed that Extremely Wicked Shockingly Evil and Vile does dramatize Bundy, Rubin still thinks his characterization showed who he really was. Rubin said:

I believe that in order to show him exactly the way he was. It’s not really glorifying him, but it’s showing him. When they do say positive and wonderful things about him, that’s what they saw. That’s who Bundy wanted you to see. I think the movie does glorify him more than I think he should be. But like I said, I think everyone should see it, and understand him as what he was. Even when he was the perfect son. Hopefully, it’ll make women more aware of their surroundings, and be more cautious.

Efron's portrayal of Bundy aside, Extremely Wicked Shockingly Evil and Vile is still a piece of entertainment made for our viewing pleasure. Speaking to Silver Screen Bat, Berlinger revealed that while the majority of the film is an accurate representation of what really happened, there are a few instances where the movie is different from real life.

"The nature of narrative filmmaking is that you have to compress time; that the unfolding of time is not the same as in real life and you do have to take certain liberties," Berlinger told the publication. "I’m very proud that the film actually hues very closely to real life, but you do have to think in a three-act structure. You have to make it entertaining for an audience."

The Extremely Wicked Shockingly Evil and Vile director then shared that he struggled with piecing together moments from Liz's memoir "where she talks about having found things that made her think twice." Berlinger explained that these were events that took place over a long period time in real life. But in a 105-minute film, it had to be compressed.

"If I, in the first act, had Lily find a knife or a bowl of keys, she would’ve, I think, looked like an idiot to the audience for not catching on," Berlinger said. "There were just certain things in the memoir that I just had to leave out because time is different in a narrative film than it is in real life and even as it is in the documentary."

Despite the historical discrepancies in Extremely Wicked Shockingly Evil and Vile, the Netflix film is bound to shed some light on Bundy's true personality — and the people who believed him.

Extremely Wicked Shockingly Evil and Vile premieres May 3 on Netflix.