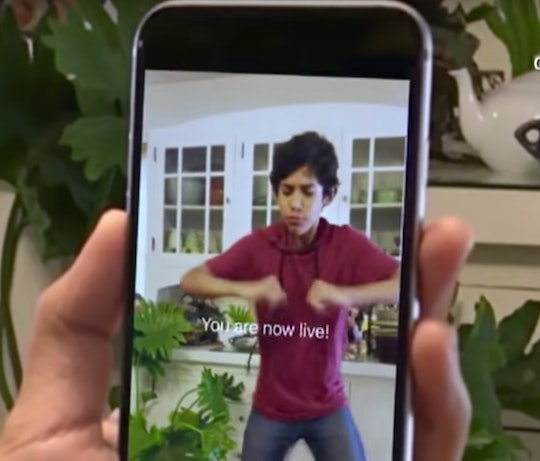 Instagram is Facebook's younger, more relaxed cousin — and because they belongs to the same social media family (Facebook acquired Instagram in 2012), their more fledgling capabilities are beginning to mirror each other. On Monday, Instagram announced that it would begin to roll out to all users in the United States a live video streaming feature, a tool that's similar to the more mature (and more serious) Facebook Live. That's because Facebook Live and Instagram Live are different in one crucial way: The former allows for recordings to be archived for later viewing, while the latter's approach embraces the truly ephemeral, undoubtedly to encourage users to post as many zany videos are their hearts desire without fear that their on-camera antics will haunt them later on.

Instagram first introduced the capability for select users last month, allowing them to opportunity to enhance the experience of using the already audaciously Snapchat-esque Stories feature by sharing snippets of their lives — live! — with followers. And to make it easier to catch good content when a user is on the app, the company also developed an "Explore" feature tailored to each user (based on their algorithmically determined interests) that will showcase relevant Live videos streaming at any given moment, according to WIRED.

On Instagram Live, viewers can both comment and add hearts to the streams while watching, just as they can when they catch a live broadcast on Facebook and Periscope, according to Mashable. Those two tools often lend themselves to capturing important events, like a police press conference or a politician's speech, because they present the option for playback after the stream has ended. That's not the case with Instagram Live, which sets it apart from the rest and makes it distinctive for its more unencumbered vibe (or so its creators apparently hope). In an email to WIRED, Instagram spokesman Gabe Madway wrote that the decision to make the videos fleeting reflects the way the company believes its users prefer to share video:

Live is unedited and stays in the moment, and it’s the way many people on Instagram want to share. We thought it made sense to integrate live video into stories because that’s the space for ephemeral sharing on Instagram.

Instagram has been branching out into the realm of video since August, when it first launched Stories, which is reports that more than 100 million people use each day. To get started on the next phase of that, simply swipe right in the app and tap the “Start Live Video" button, and stream for as long as an hour.