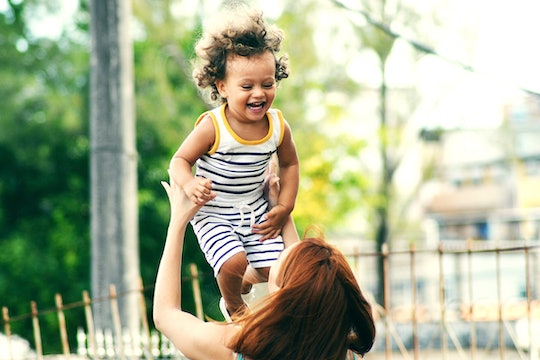 How Millennials Are Having Kids

First — to be clear, millennials are defined as those between the ages of 20-36 in the year 2017. This expansive demographic is taking over: In 2016, millennials overtook Baby Boomers to become America's largest generation, according to the Pew Research Center. In addition, millennials are making their own decisions and doing things in ways that their predecessors may not have done. What might have worked in the past for their parents isn't what exactly what works anymore, especially when it comes to planning a family.

According to Smithsonian Magazine, this can partially be attributed to growing debt and uneasy financial situations. But despite these setbacks, according to the Pew Social Trends, millennials remain optimistic. While people love to talk about them — whether they're criticizing them or praising them — the statistics surrounding millennials and how they have kids prove they're following the American "dream" — it just happens to look a little different now.

They're Taking Their Time

According to Bloomberg News, millennial moms are waiting longer to become mothers and start families. In 2014, the average age of a mother was around 26 years old. Meanwhile, the average age of women having babies in their early 20s is significantly decreasing. According to one study conducted by the Bureau of Labor Statistics on the "younger baby boomers" born between the years 1957 and 1964, over 70 percent of them became mothers by the age of 30. That is no longer the case — according to Bloomberg News, more women than ever are now waiting until their 30s to have kids.

According to the Bureau of Labor Statistics, this could be because of increases in the reliability of birth control, college attendance (and completion), and more women deciding to enter the work force.

They're Taking A "Non-Traditional" Approach

The majority of millennial men and women between the ages of 26 and 31 in 2011, according to The Atlantic, were having children outside of marriage. The study, conducted by researchers at John Hopkins University, found that 57 percent of births between non-college educated men and women of these ages were born not within a marriage but outside of one — proving that many millennials are having kids before taking the marriage plunge. A May 2016 Gallup analysis also found that more than 62 percent of millennials are okay with having a child out of marriage — and "almost half of the oldest millennials who have never been married" have children.

They're Intent On Having Kids

While millennials may be waiting longer to have kids, that doesn't mean their desire to grow a family isn't there. According to the Gallup analysis, in 2013, 87 percent of millennials said they want to have children "someday." While it might not happen in their early 20s, it will likely happen for many of them eventually, regardless of their circumstance — and when it does it'll cost a fair amount. According to CNN, the Department of Agriculture estimated that it would take parents $233,610 to raise a kid in 2015.

Millennials are using many different methods — including in vitro fertilization — to become pregnant. According to Parents Magazine, a 2016 infertility report conducted by the Reproductive Medicine Associates of New Jersey found that, in 2013, more millennial women were choosing IVF to get pregnant than ever before, opting for the transfer of a single embryo than multiple embryos. The growing use of IVF resulted in 2,000 more babies being born in 2013 than in the previous year.

Because egg freezing is a readily available option, millennial women are now heavily considering it — opting to travel the world and become successful before having kids. According to the Reproductive Medicine Associates of New Jersey report, because women are waiting longer in life to have kids, they're more likely to need to "rely on assisted reproductive technology."

The Embryo Adoption Awareness Center explained in its own report that this trend is likely due to the fact that millennials are "overconfident" in their ability to conceive a child — which leads to using alternative means to get pregnant, such as embryo adoption or surrogacy. According to The Atlantic, the number of babies born through surrogate mothers in the United States, for example, has almost doubled in the last decade — despite the high costs involved. (That number isn't limited to millennials but still points to an interesting phenomenon.)

According to The Huffington Post, a more millennial women in their 20s are responsible for unplanned pregnancies than any other age group, meaning that they're taking a more relaxed approach to using birth control than their older (and perhaps younger) peers. But this also translates over into their pregnancies as well, as millennial women are also taking a more natural approach to having kids, with a growing number of millennial mothers in the United States turning to midwives to handle their labor and delivery, according to The Atlantic.

Due to technology and the ever growing number of options, millennials are taking their time having children, selecting a custom approach to the way they do have kids when it's time to set down roots. In spite of the many headlines that label millennials as selfish or free spirits who refuse to settle down, the reality is that millennials do want kids and are having kids — they're just making sure they're the ones calling the shots.