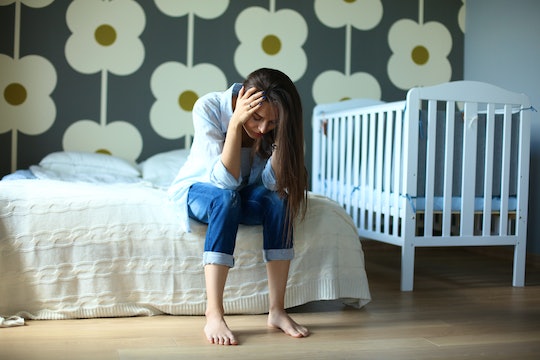 6 Ways New Moms Are Affected By Lack Of Sleep

Being tired is a completely normal part of parenthood, but many moms are taken aback by the intensity of exhaustion during the "new mom" phase. Sleep deprivation takes its toll on your body, but just how are new moms affected by sleep loss? Studies are showing that the effects are worse than people think.

It makes sense that a new baby brings about exhaustion. The short bursts of sleep during baby's two to three hour naps, the constant feeling of being needed, the new weight of responsibility. Saying it's a lot to handle is putting the title of new mom lightly.

It turns out, the effects of exhaustion aren't just in your head. One study from the Public Library if Science found that the result of frequent waking and short hours of sleep lead to excessive daytime sleepiness in the 33 women they studied over the first 18 weeks postpartum. The study called for employers to be aware of this fact when creating their maternity leave programs, because excessive daytime sleepiness can certainly effect a person's quality of work among other things.

Although a certain amount of sleep loss is to be expected, many parents aren't aware of the negative effects that not getting enough sleep has on their bodies, and so they don't make it the priority that it should be. Parents suggested that new moms make an effort to make up lost sleep (which is possible over short periods of sleep loss) when they can, ask their partner, or a friend, or parent for help, and try to go to bed as early as possible to ensure they're getting the maximum amount of rest as possible and avoiding these common side effects of lack of sleep.