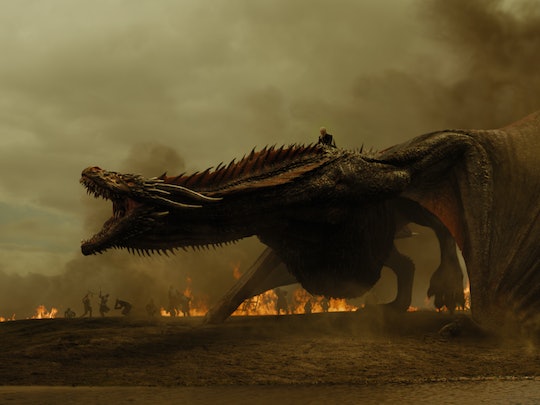 Drogon Obtained A Serious Injury On 'Game Of Thrones'

On the most recent episode of Game of Thrones — and in the most recent epic battle of the series — Daenerys rode her dragon and set fire to as much of the Lannister army as she could. But after watching Bronn use Qyburn's "scorpion" machine to shoot an enormous spear at her dragon while Daenerys was flying high, fans are asking a very important question: how bad are Drogon’s injuries on Game of Thrones? He's been hurt worse than this before, when the Sons of the Harpy shot dozens of arrows into him at the end of season 5, but he's also bigger and stronger now.

Even so, Bronn’s shot at Drogon appeared to be somewhere near one of his large wings, which is a lot less serious than the blow Aegon the Conqueror's dragon, Balerion, obtained after he got hit directly in the head. His skull is permanently stored below the Red Keep. But where Balerion’s shot to the head killed the full-grown dragon, who was already much older than Drogon is now, Drogon’s injuries on Game of Thrones probably aren’t as bad as they might seem.

When he made a quick landing and Daenerys dismounted him to pull the spear out of his scales, it became clear that while he was in enough pain to remain grounded, the resulting wound isn't that serious, especially since he’s shown prominently in the preview for Episode 5.

Unfortunately there’s the possibility that Qyburn and Cersei affixed the "scorpion" arrows with some kind of poison (clearly the two are a match made in heaven with their shared love for poisons), but we won’t see the results of that for some time. There is, however, the theory that Daenerys’ dragons will die according to the deaths of their namesakes.

Viserion was named after Daenerys’ brother Viserys, who was killed by Khal Drogo’s molten crown of gold, so the dragon could potentially die in a way that involves gold or something hot and deadly. Rhaegal, named after Daenerys’ oldest brother Rhaegar, could meet his maker in a way similar to Rhaegar’s death at the hands of Robert Baratheon, who killed the Targaryen by slamming his warhammer into his chest. And finally, Drogon, Daenerys’ only dragon who’s allowed her to ride him, was named after Khal Drogo, who ended up dying after being essentially poisoned following his chest wound.

The idea of all of Daenerys’ dragons dying before Game of Thrones is over is a pretty depressing thought, but you can’t ignore the parallels between Drogon’s injury and Khal Drogo’s injury before his death back in Season 1. If that theory holds any merit, then Bronn’s shot at Drogon is going to be what eventually kills him. But as it stands, it seems like Drogon will live to fight another battle.