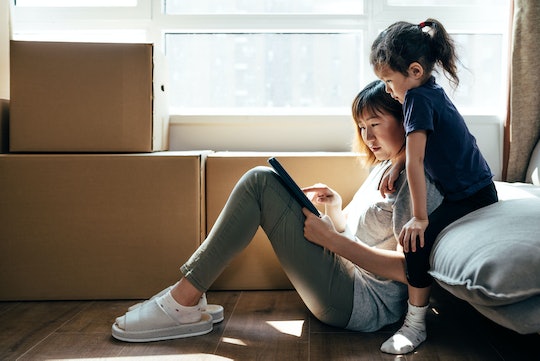 Is Screen Time Reaallly That Bad For A Kid?

I don't want my kid to grow up to be depressed, or isolated, or to spend all their time chasing invisible Pokémon around town, and I'm aware of the fact that looking at my phone too much is bad for me, too. I know that screen time is "bad," but also, I love screen time. The only time my 3-year-old can sit still at a table in a restaurant long enough for me to tackle a bowl of ramen (just for example) is by giving him Pete the Cat on the iPad. We give our kid lots of outdoors time, and I'm against using screens as a crutch... except when it suits me, honestly. Where is the sweet spot with this? Do I really need to be so effing worried about screen time?

Here's the thing about experts: THEY DON'T KNOW.

I spent HOURS of my teenage years watching MTV and VH1 after everyone had fallen asleep. I never returned a movie to the video section of Hy-Vee until I'd watched it at least twice, which meant rewinding the tape and re-watching Gleaming the Cube and Pump Up the Volume and Heathers until my head spun with fantasies of life outside Quincy, Illinois, all of which, apparently, involved Christian Slater.

LOOK AT ME NOW I GET PAID TO TELL YOU HOW TO PARENT YOUR CHILDREN.

OK, experts know some things. For example, smoking seems to lead to lung cancer and heart disease, getting hit in the head repeatedly by 300-pound men in helmets causes brain damage, and having children, especially naughty and unattractive ones, leads to adults having a lot less sex.

But when it comes to screen time for kids, there aren't any hard and fast rules yet. That's because the research so far shows no direct connection between any one factor and negative outcomes — that what makes screen time a concern is far more nuanced than how long a kid sits in front of a screen — although that is part of the equation.

This means that most organizations that publish recommendations on screen-time limits intend for parents to use them only as guidelines. For example, the American Academy of Pediatrics (AAP) has some pretty thorough guidelines on screen time. For kids age 2 to 5, they recommend limiting screen time to one hour per day of "high-quality programming." They also recommend reinforcing what your kid learns from a screen in real life (it only takes 30 seconds of explaining for kids to wrap their heads around moral issues on TV shows, says a new study), setting boundaries, and making good choices about the media they consume. You know. Parenting.

But, as Common Sense Media found in its 2017 study The Common Sense Census: Media Use by Kids Age Zero to Eight, parents aren't following these guidelines: "Kids age 8 and under spend an average of 2 hours and 19 minutes a day with screen media." Kids are mostly watching TV, but they're spending more and more time on internet-connected devices (98 percent of kids 8 and under have a mobile device in the home; the same share of kids have TVs).

Also, although parents cite a variety of reasons they allow their kids to use screens, including "teaches them how to use technology" and "teaches them problem-solving skills," BOOM: Two of the most popular reasons are "keeps them distracted" and "keeps them quiet."

Why? Maybe because PARENTING IS HARD YOU NEED TO EAT YOUR RAMEN MAMA I SEE YOU.

The reality for many parents is that enforcing screen-time limits is a luxury. If kids aren't on screens, you have to find something else for them to do. And unless you have one of those unicorns who actually sits in one place for three hours and reads a book, you have to find someone to do things with them. So either you're available (read: You're not at your job or doing any of the million other things it takes to parent a kid, not to mention several kids), or you can afford to pay someone to do activities with them. You also need to have reliable transportation to bring your kid places; safe and neatly kept playgrounds within walking distance of your home; a yard; and/or the scratch to buy toys or activities that will keep their interest for longer than three minutes.

Not surprisingly, parents in lower-income families are more concerned than parents in higher-income families about the health consequences of their children's screen use. And they should be: A recent study published in the Journal of the American Medical Association showed developmental delays in children with the highest rates of screen time (the study is not without problems and, as is the case with so many studies, is inconclusive).

Of course, it's not only kids in lower-income families who are using tons of screen time. And pediatrician Harvey Karp, CEO of The Happiest Baby and inventor of the SNOO Smart Sleeper Bassinet (which you can now rent), thinks he knows why.

"Parents today are doing something that's completely abnormal," Karp says. "They're raising families without extended family helping them. … Digital media is part of filling the gap. [But] it doesn't allow for interaction — you don't practice any of that. And delayed gratification, investing yourself in a task that takes time to complete. None of that is really a part of screen time. Even if it's educational screen time."

But, he says, limits like the ones suggested by the AAP are only a starting point, and parents have to do what works for their families. Says Karp, "Be flexible or die. You need to have a philosophical view or touch point and then be ready to throw it out the window when it's not appropriate. If you're on an airplane trip and you say to your 3-year-old, 'Your one hour is up,' you would be attacked by everybody else on the plane."

IF IT'S POSSIBLE DON'T PARK YOUR KID IN FRONT OF A SCREEN FOR HOURS WITHOUT INTERACTING WITH THEM. IF IT'S NOT POSSIBLE CHOOSE THE BEST CONTENT AVAILABLE TO YOU AND FORGIVE YOURSELF. YOU'RE DOING THE BEST YOU CAN WITH WHAT YOU HAVE AND HARVEY KARP SAYS YOU'RE DOING "A PHENOMENAL JOB." YOU GOT THIS.