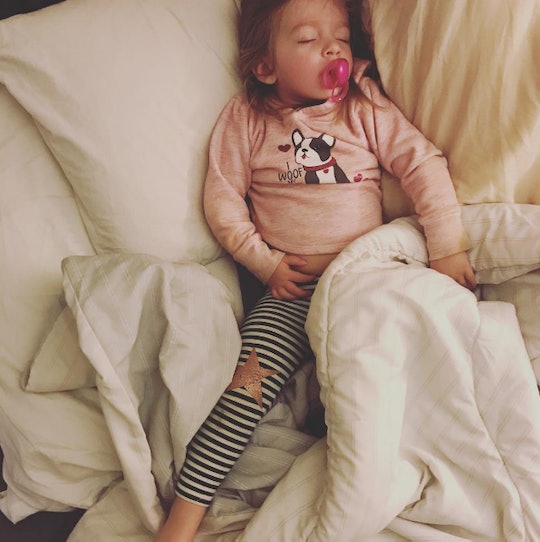 How Bed-Sharing Affects Your Kid Later In Life

Bed-sharing is a controversial topic in the parenting world, and not just because of SIDS or sleep-related infant deaths. There are many people who argue that how bed-sharing affects your kid later in life is worth paying attention to, but what does that mean? Does bed-sharing turn your children into adults who can't function without sleeping in the same bed as someone? Or does it make them fiercely independent in an effort to get away from their parents as quickly as possible?

Honestly, it's neither. And it all depends on your personal situation. According to Parents, when co-sleeping fits within the cultural preferences of your family, there are no negative psychological outcomes. Meaning, if you and your child are both happy with your sleeping arrangement, your little one should not be affected negatively later in life. It is comforting, it is what works for both of you, and it is a safe arrangement.

In fact, one study that claimed to have found negative consequences of bed-sharing, such as children internalizing problems with prolonged bed-sharing, had a small sample size and limited information on why the children were sharing a bed with their mom according to Redbook. Were the families impoverished? Was there depression throughout the family because they were poor and that's why they had to share a bed? Did these situations cause anxiety rather than bed-sharing causing issues?

According to Fox News, bed-sharing is linked to fewer behavioral problems for children, despite many believing that bed-sharing would cause insecurities, anxieties, and confidence issues. Dr. James McKenna, the director of the Mother-Baby Behavioral Sleep Laboratory at the University of Notre Dame noted that the judgments people place on a child's development because of bed-sharing are societal and have no scientific evidence to back them up. Instead, research and studies have found that co-sleeping and bed-sharing give children the capacity to fully engage with others, develop problem solving skills that children who sleep alone may not possess, and that human development is too complex to link with one particular idea or notion, whether it's bed-sharing or sleeping alone.

In short? Bed-sharing probably won't make a big difference in your child later in life as long as both you and your little one are happy with the arrangement. If anyone is uncomfortable, it could turn into a negative outlook, but as McKenna suggested, if everyone is happy, bed-sharing can only expand on those positive personality notes with its influence on a child's development.