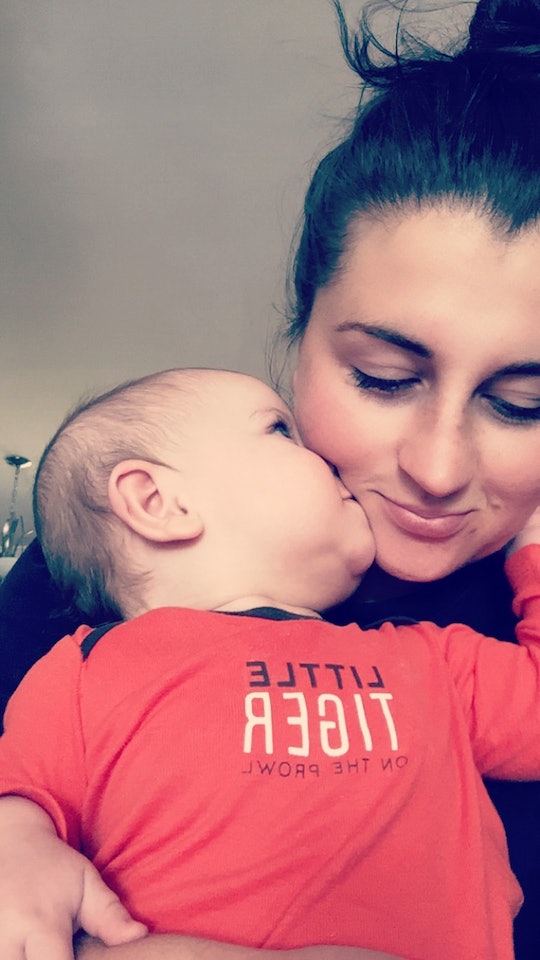 How Being In An Emotionally Abusive Relationship Affects My Parenting

I remember the pleading and the crying and the outright begging I did as my then-partner brutally broke up with me when I was eight months pregnant. He made me feel like it was my fault he was leaving me, that I was the one who exhibited the bad behavior in the relationship; that it was my “bad attitude” and my “emotional issues” that made him leave me. I could've never forecasted how being in an emotionally abusive relationship would affect my parenting, because at the time, I didn't know I was in such a relationship. When my boyfriend left me, I believed him when he said it was my fault. I wouldn’t allow myself to give him one ounce of the blame. Instead, I took it all and carried it on shoulders because that's exactly what I'd been conditioned to do.

Even after our breakup, when he'd essentially forced to move into my parents home nearly 300 miles away, I still bought him a plane ticket so he could be with me for the birth of our son. At the time I believed that gesture would show him I wasn’t all that bad, that I could be good, that I was someone worth loving. The truth of the matter however, was that I was entangled with someone who not only didn’t want to take responsibility for his own actions, but his own child, either.

I'd never even considered the possibility that I'd been in an emotionally abusive relationship for the more than two years we'd been together. But I realized it the moment I gave birth to my son. As any mother would tell you, your entire world shifts when you see your baby for the first time. And when I looked into the sweet, overwhelming innocence and helplessness of my baby's eyes, I understood for the first time just how toxic and emotionally damaging my former partner's behavior had been.

I look at my 8 month old today and can’t help but feel immense excitement for what the future holds for him, but that elation is matched with a significant amount of anxiety as well. I feel a special kind of guilt for not being able to provide a “normal” family structure for my son. It’s as if the guilt I felt during my abusive relationship has transferred into my parenting. I used to get a sinking feeling in my stomach if I was going to be later than expected coming home from work because I knew I'd be faced with a barrage of interrogative questions from my partner. He thrust guilt upon me the second I walked through the door. But now, when I'm later than expected from work, I feel a different kind of guilty that I wasn't home in time to get my son to bed or give him his last bottle. I've replaced the guilt my ex put on me with another kind: guilt I've thrust upon myself.

I don’t want my child to grow up thinking I’m not doing enough or that I’m not there for him when he needs me.

As a result of this, the second my son cries I pick him up, I rock him to sleep for every nap rather than letting him cry it out. If he's too upset in the crib, I take him to sleep with me in my bed. My mother, not so sensitively, called me out during one of my son’s particularly crabby nights I kept rushing into the other room to rock my son back to sleep whenever he'd wake, and she looked at me and said, “You need to stop acting like such a guilty parent, you’re spoiling your child.”

Though it stung, there was a whole a lot of truth to her words. I'd been in a two-year relationship where I did nothing but feel bad about myself and feel guilty for being told I wasn’t doing enough. I don’t want my child to grow up thinking I’m not doing enough or that I’m not there for him when he needs me. I worry that I've trained myself to react out of guilt, and that doing so will damage my child’s emotional development because I might insist on blurring the lines of what constitutes spoiling and what doesn’t.

On the same hand, I'm often overly sensitive to any kind of criticism on how I parent my child, regardless of its constructive nature. I’ve gotten enough criticism on my character to last me a lifetime, and the last thing I need is judgment on how to raise my child. Lately, I've had to learn the art of diplomacy in weeding out good advice from the bad, rather than clumping it all together and dismissing it with a sarcastic and defensive remark. I've been parenting with the “I can do it myself” attitude and because of that, I turn down a lot of offers to have babysitters other than my parents, or even have doors opened for me while I juggle a stroller, diaper bag, and purse all at once. I feel like it’s because I’m constantly moving through life with the idea that I’m a single mom and I’m alone and I better get used to it because this is how it's going to be.

When I was with my ex, I was often reprimanded for seeking help or advice from anyone but my ex. During our relationship, I was alienated from friends and family, and usually left feeling like it was him and I against the world. I’m only just beginning to understand that acting the way I do isn’t helping me become a better parent, or my son become a more well-adjusted child.

The aftermath of my emotionally abusive relationship has also greatly affected the ways in which my ex and I attempt to co-parent. Every conversation we try to have relating to our son is met with hostility and combative behavior. My ex is often angry because he has no control over the decisions I make for my son. He's not involved financially and his visits are infrequent and sporadic. As a result of his lack of control, a luxury he was so used to, he resorts to spewing out a variety of threats at me to intimidate me into giving into his wants. I dread every single daily FaceTime with him, because I’m afraid he’ll begin to pick another fight, which he, in turn, then blames on me. I hate still feeling like the “crazy” person he so frequently makes me out to be, and I worry often that our daily calls mean he might still hold any kind of control over me. I’m disappointed in our inability to get past this vicious cycle, but the worst part is knowing that the only person this really hurts is my son.

Despite having to come to terms with a lot of the tough ways in which my past has affected my parenting, I feel it's given me a lot of strength I didn’t know I was capable of having. Despite the residual fear and anger I feel towards my ex, I don't want that to stand in the way of his relationship with his son. I will always make it a point to never burden my son with the scars from that relationship. For the first time in a long time though, I'm falling in love with myself and with who I am. I feel, for the first time in a long time, empowered by who I am as a mother and human being. The fact that our relationship ended helped awaken a strength inside of me that I didn't know was there, and I won't ever forget that power I feel.