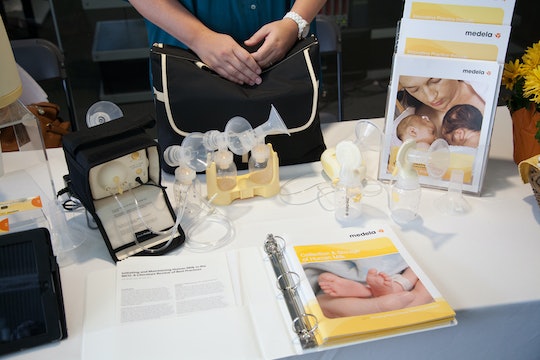 How Can I Donate My Breast Milk? It's Easier Thank You Think

Before I gave birth to my daughter, I decided that I wanted to breastfeed and I wanted to do everything I could to have an adequate supply and a good experience with it. I started pumping soon after I came home with my daughter and quickly learned that my body was more than OK about making enough milk. Before my daughter was 3 months old, I had filled several extra-large freezer bags with stored milk. I intended on using it to make baby food, but soon began wondering how I could donate my breast milk.

According to La Leche League International, the first milk bank in America was founded in Boston in 1911. Used primarily for babies who were sick, women would continue to breast feed their own babies while donating milk to these banks so that hospitals could use the milk to nourish other children. The concept did well until the 1980s when formula made specifically for premature babies was introduced and the fear of HIV scared many people away from using donated breast milk.

But now, milk banks are on the rise and aren't just for sick babies. The Human Milk Banking Association of North America notes that their milk banks across the country serve not only hospitals, but infants at home that may have been premature or have a medical condition, such as formula intolerance. They are also happy to serve babies that are 100 percent healthy, but may be adopted or unable to get their own mother's milk.

It's a worthy cause, and if you are able to donate milk you have already collected, or would like to start pumping an extra supply, the milk banks could use your help. The best way to start the process is to find a milk bank. The Human Milk Banking Association of North America has a few banks across the country, but they also cover the costs of shipping if there's not a bank close to you.

Once you've contacted a bank near you or one you'd like to ship your donation to, you'll have to undergo a screening process. There's a short interview to verify that you live a pretty healthy lifestyle and that you are willing to undergo a blood test. Each milk bank has its own set of protocol, so there is no one-size-fits-all guideline for becoming a breast milk donor. Some banks may have minimum amounts you have to donate, and some may be willing to receive a one-time donation.

But once you've been approved as a donor, donating your milk is easy. The bank you choose will provide you with storage bags and a cold shipping container in order to ship your breast milk. Most will also pick up the milk from your doorstep so you don't have to worry about sending it off.

Whether you have a one-time donation to give or hope to become a frequent donor, donating your breast milk is a wonderful way to volunteer and help other mothers and babies. No one likes to think of their child needing something they can't provide, but the mothers that receive your donations will be so thankful for you and your generosity.