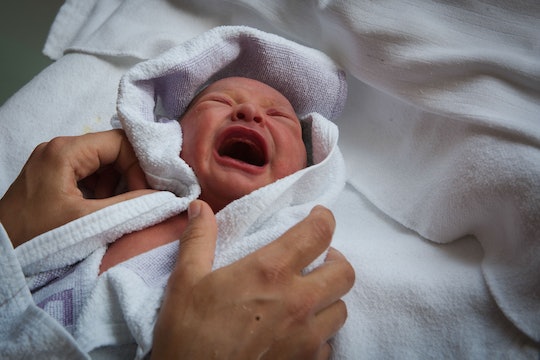 How Can Newborns Get Zika? Babies Can Be Vulnerable To The Virus

Ever since World Health Organization declared the Zika virus an international public health emergency, scientists and researchers have been scrambling for answers and cures to relieve growing concerns that the virus could cause serious birth defects. Officials have already linked the virus to microcephaly, which can cause unusually small heads and brain damage in newborns. By now, most pregnant women might be aware of how to protect themselves and their budding babies against the virus, but many may still be wondering how newborns can get Zika.

First, the bad news: It’s possible. The good news: Symptoms and complications are similar to an infected adult, which is much better than when the bun is still in the oven. For now, the Zika virus does not seem to be as dangerous to babies as it is for fetuses. According to the Centers for Disease Control and Prevention (CDC), infants and children can become infected by the virus at any age and the method of transmission is the same — through a bite from an infected mosquito. If an infant is bitten by an infected mosquito the symptoms would be the same as an infected adult would experience, but they may be more susceptible to a high fever and a rash, as babies generally have weaker immune systems.

The CDC says the virus can also be transmitted to a baby through perinatal transmission, which happens when the pregnant or recently mother becomes infected with Zika within two weeks of delivery, causing the infant to develop a rash and fever symptoms. Congenital or intrauterine transmission are more serious and can happen when a mother becomes infected during her pregnancy, but before the last two weeks. This kind of transmission can lead to the more detrimental birth defects.

While babies are more susceptible to the virus, the likelihood of getting sick with Zika is only one in five, according to the CDC. Like chickenpox, once a person has been infected, he or she is likely be protected from future infections.

When is comes to prevention, the CDC recommends you take extra precaution as insect repellent should not be used on babies younger than two months old. You’ll need to use mosquito netting to cover strollers, carriers, and cribs to protect them from bites.

The best way to protect your newborn from Zika is to use those mosquito nets as much as possible and put screens in windows. Avoid travel as best as you can to Zika-affected countries. During the summer months, try to keep your yards clear of standing water pools. As it’s not recommended to to use insect repellent on infants, another option is to light insect repellent candles or start a garden of citronella plants, which mosquitoes tend to steer clear from.

Keeping newborns free from Zika may not be entirely fool-proof, but it seems that, if nothing else, preventative steps are relatively simple.