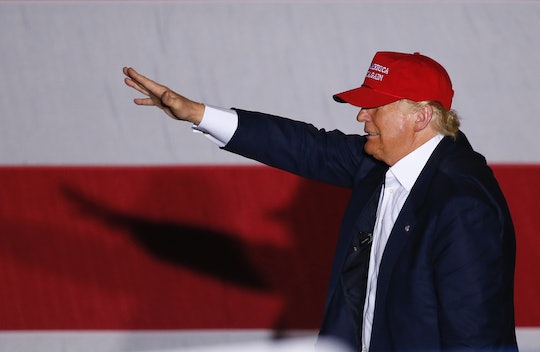 How Can The GOP Stop Trump From Getting The Nomination? There's Still Hope

Like a cartoon snowball rolling down a hill, Donald Trump's lead in the Republican primaries is growing steadily larger and more dangerous, and it seems that nothing short of a crate of TNT is likely to stop it. After pulling off big wins in Florida, Illinois, and North Carolina on Tuesday, he's now claimed more than half of the 1,237 delegates needed to secure the Republican nomination, leaving many wondering how the GOP can stop Trump from winning. If he doesn't get enough delegates, that could lead to a contested convention, and American Muslims wary of internment camps can breathe a sigh of relief. But what if he does get them? It's looking more and more likely.

It turns out that even if Trump gets enough delegates, all hope is not lost. The thing is, there's actually no federal law that says that the delegates have to vote the way they're told to. And while some states have such laws on the books, they're actually hard to enforce, and the Supreme Court has ruled that they take a backseat to the Republican party's rules, according to Newsweek. That means that there's a lot of wiggle room for delegates at the Republican National Convention this August.

The rules of the Republican Party are long and dry as hell, but there are a couple that are important to consider for those dreaming of a non-Trump nominee. The first is Rule 16, which is the one that binds delegates to their candidates. But the rules aren't set in stone; before the nomination vote, there's a rules committee that votes to amend or drop rules, and Rule 16 could be one of them.

Then there's Rule 40, which states that candidates must "demonstrate the support of a majority of the delegates from each of eight (8) or more states." According to Reuters, if Trump doesn't meet that threshold, his nomination could be challenged.

Trump however, won't go down without a fight. The former reality show star, who the Cumberland County Sheriff's Office recently considered pressing charges against for inciting a riot in North Carolina, was asked by CNN what would happen if he was denied the nomination, to which he responded, "I don’t think you can say that we don’t get it automatically. I think you’d have riots. I think you’d have riots. I’m representing many, many millions of people."

Republicans who don't want to vote for Trump or be threatened by him do have one other option, an option that Trump himself once toyed with: a third party run. Politico reported that top conservatives will hold a meeting on Thursday to brainstorm how to get a “true conservative” challenger on the ballot this fall, and it looks like that's the best way to do it.