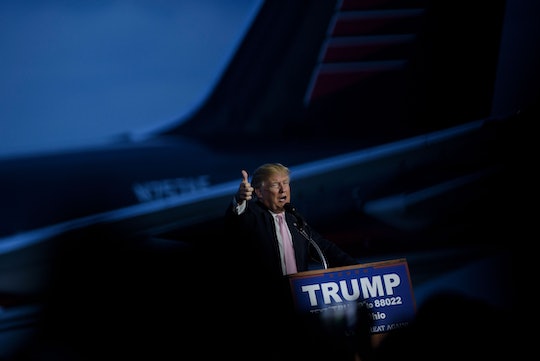 What Happens If Donald Trump Wins On March 15? Things Are Looking Dire For The GOP

The March 15 primary elections in Florida, Ohio, Illinois, Missouri, North Carolina, and the Northern Mariana Islands offer the most delegates up for grabs since Super Tuesday, leading various outlets to call it "Mega Tuseday," while I prefer to call it "Super Tuesday 2: Electric Boogaloo," because I use humor to cope with tragedy. What will happen if Trump wins March 15? Human sacrifice? Dogs and cats living together? Mass hysteria? Probably at least two of those. Donald Trump currently holds 460 delegates, and while clinching an additional 367 would still make him a few hundred shy of the 1,237 he needs to win the Republican nomination outright, it would make him damn near unbeatable.

Trump is expected to win in most, if not all, of the primaries on Tuesday, including the winner-take-all contests in Florida and Ohio, which is super sad, considering that two of his opponents are from those states. While Florida Sen. Marco Rubio still holds on to the pitiful delusion that he could win at home (poor Marco), he actually told his Ohio supporters to vote for their governor, John Kasich. At this point, Rubio's no longer running a presidential election, but playing a high-stakes version of Survivor, forming alliances in an attempt to get Jeff Probst to kick Trump off of the island.

Even if Rubio, Kasich, or Texas Sen. Ted Cruz fail to win 1,237 delegates, they can still do their best to block Trump from getting them. If Trump gets the most nominations, but still falls short of the goal, that could lead to a contested convention in July. Slate's primer explained that if no candidate holds the majority vote at the Republican National Convention this summer, delegates would then be "unbound and allowed to vote however they want" in subsequent votes. Voting rounds would continue until there was a consensus. In 1924, Democrats took 103 rounds to settle on their candidate, so this could take a while, but it seems like party leadership is willing to do whatever it takes to get rid of Trump.

Trump is well aware of the GOP's plan to give him the boot, telling Fox and Friends that a contested convention would be "pretty unfair" and that "a lot of people will be very upset" if he doesn't get the nomination. My 7-year-old gets very upset when he's not allowed to play video games all day, or eat dessert without finishing his dinner, and he also finds it unfair. But I impose these rules on him for the same reason that the GOP is trying to block Trump — for his own good. It seems that Republican voters, much like a 7-year-old, don't always know what's best for them, and sometimes the grownups have to step in to make sure they're kept safe.