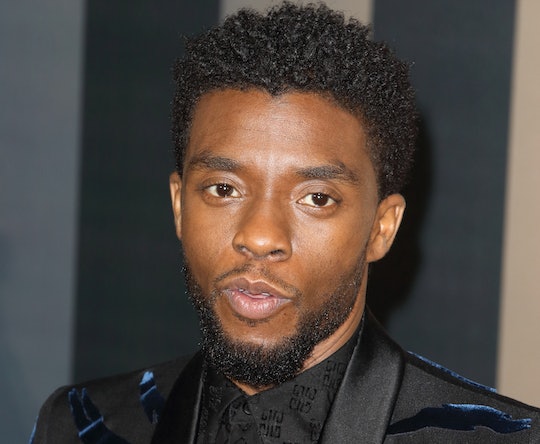 Leave it to a mother to guide her son through an incredibly difficult time. Roughly a week after his tragic death, more information has come to light about why Chadwick Boseman chose to keep his cancer diagnosis a secret. As his agent recently told The Hollywood Reporter, the Black Panther star was a very private person and apparently made the decision to not discuss his health publicly with advice from his mother in mind.

Boseman was diagnosed with Stage 3 colon cancer in 2016, according to The New York Times, and died after four years of battling the disease. Few people in the industry knew about his diagnosis, and his death came as as shock to millions of people around the world. But, of course, not to his own family or close friends, including his longtime agent Michael Greene of Greene & Associates Talent Agency.

In fact, according to Greene, it was his own mother, Carolyn, who apparently taught him a life lesson that somewhat impacted his decision to not share his health struggles publicly. "[She] always taught him not to have people fuss over him," Greene told The Hollywood Reporter, adding that Boseman "also felt in this business that people trip out about things, and he was a very, very private person."

When Boseman died on Aug. 28, he was at home with his wife Taylor Simone Ledward and the rest of his family by his side, according to a statement shared on social media confirming the news. "A true fighter, Chadwick persevered through it all, and brought you many of the films you have come to love so much," the statement read. "From Marshall to Da 5 Bloods, August Wilson’s Ma Rainey’s Black Bottom and several more, all were filmed during and between countless surgeries and chemotherapy. ⁣⁣It was the honor of his career to bring King T’Challa to life in Black Panther."

Boseman's death shocked many in the entertainment industry, including Black Panther director Ryan Coogler who wrote a beautiful tribute to the star. "I haven’t grieved a loss this acute before," Coogler wrote. "I spent the last year preparing, imagining and writing words for him to say, that we weren’t destined to see. It leaves me broken knowing that I won’t be able to watch another close-up of him in the monitor again or walk up to him and ask for another take."