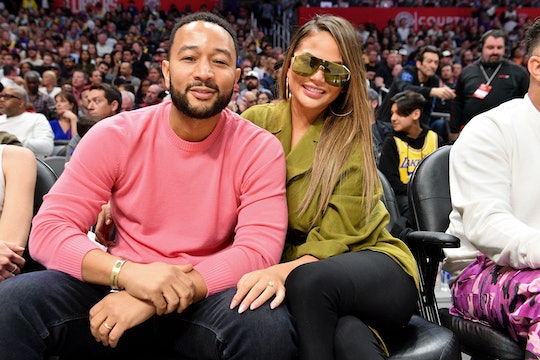 In what was probably (definitely?) the happiest news of the summer, Chrissy Teigen recently announced that she and husband John Legend are expecting their a new addition to their family in typically hilarious fashion ("Look at this third baby sh*t," she said in a video posted on social media). The announcement came as a huge surprise to fans --and it turns out they weren't the only ones. The story about how Chrissy Teigen found out she was pregnant is pretty wild, as the mom and mogul revealed on Twitter.

If you followed Teigen's first two pregnancies (with daughter Luna, now 4, and son Miles, 2), you know that she and Legend struggled with infertility. Teigen was super open about the often painful process, sharing details about everything from the price of freezing embryos to the rude questions people ask (shutting down trolls right and left, all the while). Teigen talked about expanding her family after Luna and Miles, though she "didn't think [she] could get pregnant naturally," as she shared in a tweet. But life is full of unexpected twists and turns... and boob surgeries.

In May, Teigen shared her plan to get her breast implants removed, explaining on Instagram: "They've been great to me for many years, but I'm just over it. I'd like to be able to zip up a dress in my size, lay on my belly with pure comfort! No biggie! So don't worry about me! All good!"

As with many surgeries, women are given a pregnancy test ahead of time. Knowing this, one fan on Twitter with breast reduction surgery experience pondered whether or not Teigen was expecting when she had her implants out. So began an extremely interesting thread from Teigen herself explaining how it all unfolded.

As Teigen told it, she's been in the habit of taking a pregnancy test every month or so for years, just in case (even when she and John aren't actively "trying" for a baby):

"So the morning of John's album release, he wakes up at 3 a.m. to do Good Morning America... I woke up with him and was like man, should take my monthly test to be disappointed... "

Of course, Teigen was not disappointed with the result. But she was "scared shitless. Was pretty positive you shouldn't get your boobs out while pregnant? Pretty sure."

Except sometimes, in fertility (and life), you get to beat the odds. And this is one of those times for Teigen. Or as she put it:

"But what they say so often can be true. When you give up on trying, life has a way of surprising you. In summary, my boobs hurt."

What a perfect way to sum up the experience... and, come to think of it, pregnancy in general. Congrats again to Chrissy Teigen and John Legend.