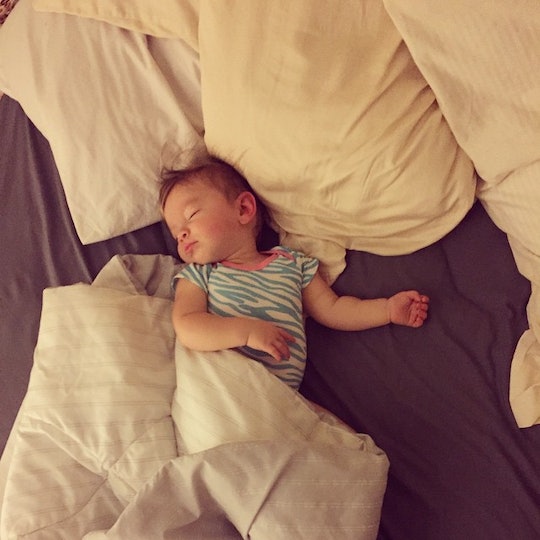 How Co-Sleeping Affects Your Kid Later

There are few parenting choices that trigger opinions, debates, and discussions like making the choice to co-sleep with your little ones. Despite the family bed being natural, many naysayers love to argue that how co-sleeping affects your kid later in life overshadows any benefits of co-sleeping.

Whether you stop co-sleeping when your child is too young to remember or if you continue to share a bed, co-sleeping doesn't turn your children into adult thumb-suckers without confidence or a backbone. Even if your kiddo continues to co-sleep with you as they get bigger, I think you'll find that the negative part is not being able to fully stretch in your own bed without a grade-schooler whacking you in the eye.

I swore up and down that I would never co-sleep with my daughter. I cited a million reasons, mainly that I thought it was unsafe and that it would ruin her future sleeping habits. Turns out that when you're sleep deprived? You'll do just about anything to catch some more Zs. I can't count the number of times I pulled my little girl into bed with me just because it was easier than getting up at 4 a.m. or trying to convince her to go back to sleep. And the damage it's caused? Well, none. She still wakes up every so often and needs snuggles or to sleep with me for a few extra hours, but she's a great sleeper and spends 99 percent of her sleeping in her own bed.

Turns out, that's pretty much the norm when it comes to co-sleeping. According to Parents, co-sleeping has no negative effects as long as you and your family are comfortable with the choice. Co-sleeping is a very natural, normal way to sleep in many countries, and those cultures do not have any negative effects because of it.

If that doesn't seem like a lot of information, it's because there isn't much on co-sleeping and its effects on a child's cognitive development or behavior. People may claim that co-sleeping breeds dependent children, but there have been no studies to prove that. In fact, one study tried to find a negative correlation between poor behavior and co-sleeping, but determined that there were too many variables and no way of knowing if co-sleeping was the culprit, or something else entirely.

Another study found that with its data, co-sleeping children were no more likely to develop a sleeping problem than children that don't co-sleep. The study's findings continued with proof that there was no correlation between a child being unable to self-soothe within the first year (thus needing to co-sleep) and developing sleep problems later in life.

In short, as long as your kid is happy to co-sleep and you are, too, there doesn't seem to be much of a change in their behavior or development. In fact, co-sleeping can give your child confidence, security, and comfort because they feel totally at ease seeking you out in the night if they need you. Teaching them not to knock you in the head while you're snoozing, however, is still up in the air.

More Like This
9 Bedtime Mistakes That Are Keeping Your Baby Awake & How To Fix Them
Here’s How Many Calories You Burn When Nursing
20 Weird But Genius Health & Beauty Tools For Babies
10 Ways Breastfeeding Is Good For Moms, Too