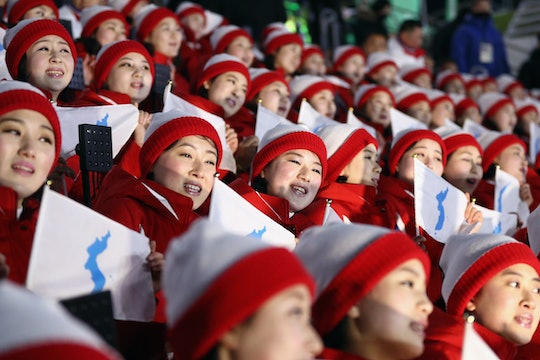 Guys, This Is How Low Temps Will Drop At The PyeongChang Winter Olympics

The 2018 Winter Olympics are officially underway in PyeongChang, South Korea, and it looks as though it's going to be a cold one. Like, insanely cold, enough to freeze athlete's water bottles cold. As the Winter Games get into full swing, how cold will it get in PyeongChang? Athletes need to stay seriously bundled up.

As of Tuesday, the temperature in PyeongChang was expected to hit a depressing high of only around 11 degrees Fahrenheit and dip to a low in the negative numbers. Athletes and members of the media have been taking to social media to lament the cold snap, and spectators are being offered warm blankets, heated seat cushions, and even rain coats to help them ward off the chill, according to The BBC.

It isn't just the frigid temperatures that are expected to make these games especially cold either; the mountainous region of PyeongChang suffers from some pretty serious high winds, and the wind chill factor can make it feel at least 10 degrees colder than it actually is. PyeongChang is a popular ski destination in the mountains for good reason; it tends to have copious amounts of snow, and, this year, some serious chilly temperatures as winds from the Manchurian Plain and Siberia get ready to whip through the area.

PyeongChang sits about 700 meters (or 2,296 feet) above sea level, making it "earth's coldest location for that particular latitude," as noted by AccuWeather meteorologist SungHyun Do. Despite the cold, Do insists that living in such a cold place has its benefits:

It is known that PyeongChang is best for all living creatures. You can maintain a good biorhythm by eliminating lactic acid and other waste out of your body in that particular environment.

Naturally, the U.S. Olympic team is well-prepared for the bracing cold snap. Meteorologists might predict that these Winter Games should be even colder than the last recorded coldest Winter Olympics in Lillehammer, Norway, in 1994, but don't worry about the American athletes. Ralph Lauren, the official brand designer in charge of outfitting the U.S. Olympic team, kitted the team out in high-tech, self-warming jackets. David Lauren, the chief innovation officer for Ralph Lauren, told Scientific American:

We knew about the cold and hit on the idea of using wearable technology to keep our athletes warm.

With that in mind, the American athletes will be wearing red, white, and blue coats lined with strips of electronic, heat-conducting metallic ink naturally in the shape of the American flag. Athletes can activate the heat-conducting function of their waterproof coats by simply pushing a button; they'll be able to choose from three different levels of heat and will be able to stay warm for up to 11 hours.

After the two most recent Winter Games, one in Vancouver, Canada, and the other in Sochi, Russia, the PyeongChang Olympics must feel like a serious shock to the system for the athletes. Both of the previous Winter Games set records for warmth, instead of the bracing cold of PyeongChang where the snow is reportedly so cold it is ruining the skis of some athletes.

Fortunately, conditions are expected to get a little warmer over the next two weeks. Especially for those athletes who will be performing in the mountains like alpine skiers, this can only be good news. Because it would be disconcerting to make it all the way to the Winter Olympics and be impeded by cold temperatures.

At least the American team should be plenty warm... that's something, right?