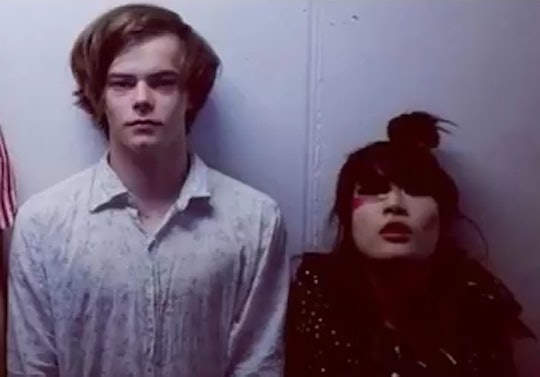 How Did Charlie Heaton & Akiko Matsuura Meet? The Ex-Couple Have An Interesting History

Most fans of Stranger Things on Netflix are pretty familiar with Charlie Heaton's face. He plays the long-suffering, smoldering brother to Will and son to Joyce (Winona Ryder), Jonathan Byers. Also complicated friend to Nancy, but let's not get into that right now. In recent weeks, Heaton has been in the news for more than just his role on the breakout television series. His name has been linked to an ex-girlfriend pretty frequently, for a shocking reason. Now fans are wondering how Heaton and Akiko Matsuura met, and how the two managed to keep their story a secret for such a long time? It's no easy feat in this right-side-up world, after all.

It seems 23-year-old Heaton played the drums in a British noise band called Comanechi, which he joined in 2013. Matsuura was the enigmatic frontwoman. He talked to The Quietus in 2013 about joining the band, and referenced Matsuura and her convenient geographical location in the interview:

I’ve swapped hanging around with teenage douchebags for hanging out with other douchebags. In all seriousness, it’s been incredible. From leaving college — not that I attended that often — to touring with the likes of Gossip and Bo Ningen, and within a month of joining the band playing in front of over 3,000 people, it’s been pretty mental. I didn’t expect it. Also I found out I live on the same street as Akiko which is pretty handy. I know that if I wanna go party it’s always five minutes away from my door.

It seems Matsuura's close location wasn't the only thing that attracted Heaton to her; according to The Sun, the couple had a little boy in May 2014, just over a year after Heaton joined the band. That's right; a secret son. A source close to the couple explained to the news outlet:

Charlie became a dad when he was just 20. He met Akiko when he was just a teen and fell head over heels in love. They’re no longer together but they have an amicable relationship for the boy’s sake. Right now Charlie’s career is his priority but he hopes to see more of his son once filming commitments calm down.

I wonder how Nancy feels about all this?

If Heaton was hoping to spend more time with his 3-year-old son "once filming commitments calm down," as the source told The Sun, he might have ample opportunity in the coming months. The second season of Stranger Things been released on Netflix, with no firm dates about filming for the third season yet announced. And he ran into some trouble at the United States border recently, when he was trying to attend the Stranger Things 2 premiere. Heaton was reportedly detained at Los Angeles airport and sent back to the United Kingdom due to an alleged cocaine possession. On Monday, Heaton released a statement to People, apologizing for the inconvenience:

While there is no word on how long Heaton will be denied entry into the United States, perhaps one bright spot will emerge from this situation. Perhaps he will get a little bit of time with his son.