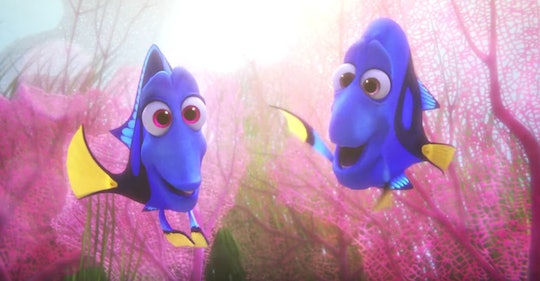 How Did Dory Find Her Parents? 'Finding Dory' Puts Dory On An Adventure To Find Them

(Warning: This post contains spoilers from Finding Dory) Finding Dory has been breaking records at the box office for a good reason. The film combines adorable sea creatures and a sense of nostalgia for Finding Nemo, making the film a hit with both parents and their kids alike. In the film, it is up to the lovable Blue Tang, Dory and a team of characters (both old and new) to help her find her parents — which they do, but not without encountering some hurdles. So how did Dory find her parents, exactly?

It wasn't the easiest journey for her to find them. As it is made known in Finding Nemo Dory suffers from short-term memory loss. And while Dory is able to overcome this due to her persistency and courage, it also hinders her. So when she loses her parents as a young fish, Dory can't remember which was is home and other important details pertaining to her parents — which makes finding them especially hard.

Luckily, Dory is able to remember things due to events or instances that trigger it. When Dory is on a field trip with Nemo's class, she is able to remember her parents live in the "Jewel of Morro Bay" in California which sets her off on her adventure to California, with the help of Nemo and Marlin.

The trio then embark on an journey to the Marine Life Institute in California where the excitement really begins. Dory ends up meeting a hardened octopus named Hank, who is dying to end up in a aquarium in Cleveland. In exchange for his freedom, Hank is willing to take Dory to her parents, as they travel all around the institute to find the home that Dory remembers. But lets cut to the chase and tail end of the film for a second. How does Dory end up finding her parents?

After successfully locating her former home within the institute, Dory arrives to find that all Blue Tang fish are being transported to Cleveland. After locating the Blue Tangs, the fish tell Dory that her parents left the institute long ago to search for her in the ocean. Thanks to Hank, Dory is able to escape out of the Institute and into the ocean but she is all alone and distressed because of it. Luckily, there is a trigger in the ocean waiting for her right under her nose— a seashell, which her parents used to tell her was a way to return home.

Dory is able to remember this and discovers a whole path of seashells which lead to a beautiful home. Dory then finally encounters her parents at the home (YES!), who are returning from a journey to get more shells in hopes that Dory would see them and remember where they were.

Every single character in the film contributes to Dory's journey to find her home and then her parents — which she successfully does on her own at the end. But the film isn't really about finding her parents; it is about the importance of friends, team work, and perseverance. Because even when Dory thought she would never find her parents, she always remembered to "just keep swimming."

More Like This
Quinta Brunson Credits Her Parents For Her Confidence, Now & As A Kid
David Beckham Impressed Mariah Carey With His Rendition Of "All I Want For Christmas"
Prince William & Kate Middleton Met A Little Boy Dressed As British Guard
Julia Louis-Dreyfus Holds Hands With Son Charlie Hall At White House State Dinner