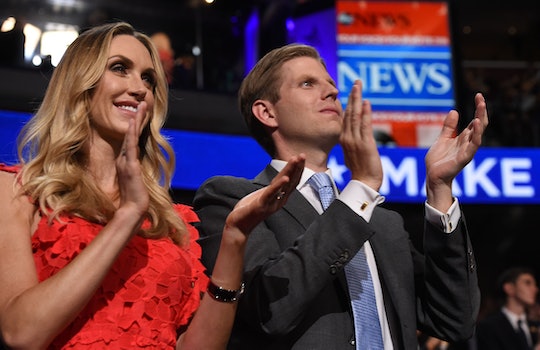 How Did Eric Trump & Lara Yunaska Meet? They Married In 2014

Republican presidential candidate Donald Trump now has his party's official nomination after clinching the required delegates during day two of the Republican National Convention Tuesday, but he's long had the public support of a slew of family members. Son Donald Trump, Jr., and daughter Tiffany Trump celebrated their father's reported investment in the success of both his employees and his children during day two of the RNC, and his second son, Eric, will take the stage Wednesday evening. As is true with the spouses of Trump's other married children, his wife has displayed her allegiance by joining the rest of the Trump clan at the RNC. She's part of the family now, but how did Eric Trump and Lara Yunaska meet?

Trump, who at 32 is the vice president of The Trump Organization, dated Yunaska for six years before marrying her at the Mar-a-Lago in Palm Beach, Florida, in November 2014, The New York Daily News reported. Although the couple hasn't publicized the story how how they met, it's clear that they share some common interests: The do work together for The Eric Trump Foundation, which raises money for terminally ill children. And he's totally accepted her miniature beagle, Charlie (who was the ring bearer at their wedding!) into his life.

The two now live in New York City along with Charlie, but they don't have any children. Donald Trump, though, has plenty of grandchild love already: Between Eric's brother Donald, Jr., and sister Ivanka (both of whom are products of the real estate mogul's union with his first wife, Ivana Trump) the family is enjoying a whopping eight grandchildren.

The newlywed couple is plenty busy, though. In addition to her work with The Eric Trump Foundation Yunaska is as associate producer on the CBS program Inside Edition who regularly runs both full and half marathons, and Trump is also the president of Trump Winery.

Eric Trump proposed to Yunaska on July 4, 2013, E! News reported. Like many Trump occasions, it was quite the family affair: Ivanka Trump's husband, Jared Kushner, officiated the wedding and Ivanka herself was a bridesmaid. Her young daughter was the flower girl, and the engagement ring, a "massive emerald cut diamond platinum ring with side stoles," even came from Ivanka Trump's own jewelry collection.

And like a true business person (a value the Trumps undoubtedly value), Yunaska certainly roll with the punches. Two weeks before the wedding, she broke both her wrists while horse riding, and they had to be bandaged on the big day. Instead of sulking or postponing the wedding though, she made best of the situation, explaining what happened in an Instagram post caption:

There are inherent risks that we all take in life. When you truly love something, it's worth it. I wouldn't take back one day of riding — stuff happens. I will ride again and it will be better than ever. Most importantly, I still get to marry the love of my life on Nov 8th! ❤️

It's a quality the Republican presidential nominee apparently admires. Donald Trump tweeted his congratulations to his son and his then-girlfriend in March 2013, when the two had been together for five years. Now, if she supports Trump as much as the rest of his family seems to, Yunaska is the one offering the congratulations during the Republican National Convention.