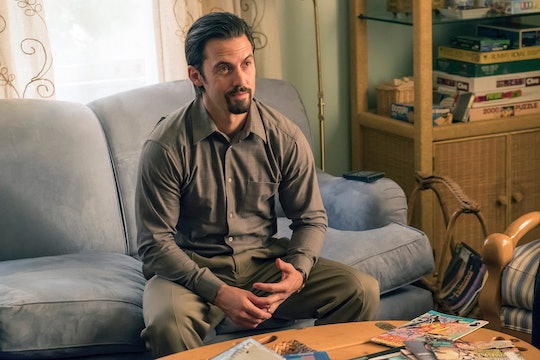 Only two days have gone by since the world discovered how Jack Pearson died. But that didn't stop This Is Us from airing another episode, which featured not only Jack's funeral but the various moments he shared with his family inside of his car. One of these moments involved teaching Randall to drive. But after Kevin and Randall get into a fight, Jack opens up about his brother to the boy in the hopes of bringing them closer together. This involved mentioning his brother's passing. But how did Jack's brother die on This Is Us? He didn't get into specifics, but it was confirmed that it happened at some point during the war.

Up until this point, all fans knew about Jack's brother, Nicky, was that he existed. And that was only because a flashback confirmed as much. The episode showcased Jack sitting in a car, hoping that his father would come out of the bar he'd crawled into so that they could go fishing together. Then all of the sudden another head popped up out of nowhere from the backseat, wondering what was going on. Jack promised Nicky that everything was alright. Then the camera cut to Jack looking at a photo of him and a group of guys from the Vietnam war. One of the guys just so happened to have dark-rimmed glasses on, just like his brother had as a child.

It was clear this grown man was Jack's brother, though it was never stated what had happened to him. Jack had never talked about having a brother ever with his family. (Well, that that we, the viewers, had ever seen.) In fact, I wasn't even entirely sure they knew he existed. But apparently they did, though Jack clearly didn't share much information with them either. Randall even came out and said that he rarely talked about his brother or his childhood ever. And while that's true, he did offer up a significant detail about the matter.

He confirmed that his brother died in the war. Fans had assumed as much prior to this moment, but now that we know it for sure, it still brings a bunch of new questions to light. Like how did it happen? Was Jack there with him? These are all things I need to know, not only to distract me from the fact that Jack is dead (though, obviously that helps a bit), but also because it's another mystery this show has yet to divulge.

At the end of Tuesday night's episode, the promo promised that Jack's story has only just begun and it flashed to a scene where Jack is clearly a soldier in the army. So we may not to wait much longer to find out more about his past and what caused his beloved sibling to die. Is it possible he died saving Jack's life? Is that why Jack always lived his life to the fullest and never took a moment for granted? Because he didn't want this brother's death to be in vain? It's certainly possible.

Jack didn't have a very happy home life — which is something we've witnessed on more than one occasion due to his father's abusive and alcoholic nature — but it's clear that Jack loved his brother Nicky and it must've been so terrible for him to lose that important person in his life. This is before Jack ever met Rebecca and I'm looking forward to seeing what made him into the man we've all come to know and love.

The details of Jack's past have only just started to unfold, but it's somewhat comforting to know that even though we know what leads to his death, there's still a way to have him live on in the show. His story is far from over and if that's not something to celebrate then I don't know what is.